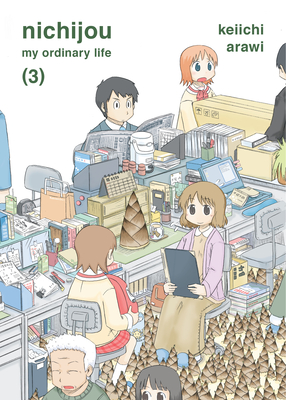 This is book number 3 in the Nichijou series.

The professor gets everyone stuck in a sticky situation. Mio goes to extraordinary lengths to protect her passionate pet project. Unexpected feelings for another teacher have taken root in Mr. Takasaki's heart. And an unfortunate misunderstanding ends up bringing two friends closer together.

The hijinks continue in this out-of-the-ordinary tale of high school life.

Keiichi Arawi (1977-) is a professional comic artist and illustrator. Originally from Gunma, Japan, he was raised in the city of Maebashi. By the time he was 19 he entered the world of comics drawing short stories for Media Factory's Comic Flapper (My Neighbor Seki, 7 Billion Needles). While his first series KazeMachi was short-lived it caught the attention of one of the bigger publishers in Japan, Kadokawa Publishing.

His short Nichijou won Kadokawa's 22nd ACE Award for New Artists and by November 2006 Nichijou was regularly serialized in Kadokawa's flagship magazine Shonen Ace. Nichijou has since then sold more than a million copies and has seen cartoon and video game adaptations.

It was also selected by Guillermo del Toro as one of the top comics out of Japan today for Asahi News' SUGOI Japan project.