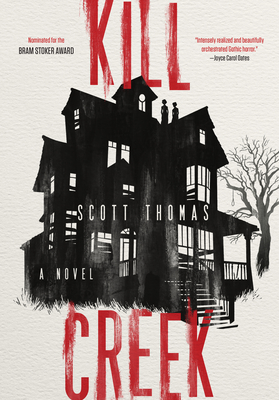 By Scott Thomas
$15.99
Click Title for IN STOCK Location

If you think the idea of four horror authors spending the night in a haunted house is cliche, you are in for a surprise. It's what happens to them after they leave the next morning that is truly terrifying. This book scared me from start to finish...and what a twist ending! — Sarah Donner

"I've only dared to read it in the daylight." --Kaly Soto, Deputy Weekend Editor, the New York Times Book Review At the end of a dark prairie road, nearly forgotten in the Kansas countryside, is the Finch House. For years it has remained empty, overgrown, abandoned. Soon the door will be opened for the first time in decades. But something is waiting, lurking in the shadows, anxious to meet its new guests... When best-selling horror author Sam McGarver is invited to spend Halloween night in one of the country's most infamous haunted houses, he reluctantly agrees. At least he won't be alone; joining him are three other masters of the macabre, writers who have helped shape modern horror. But what begins as a simple publicity stunt will become a fight for survival. The entity they have awakened will follow them, torment them, threatening to make them a part of the bloody legacy of Kill Creek.