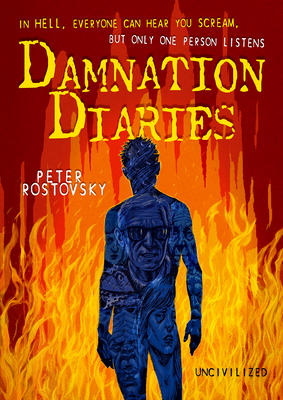 In hell, everyone can hear you scream, but only one person listens.

Hell can get you down. It's big, hot, often painful, and a hard place to get creative projects done. But something else is bothering inmate PKRx354--something beyond the unrelenting and often absurd torture routines, the demons, or the tormenting trio of his mother, father, and girlfriend also consigned to the Underworld. Luckily there's help: Fred Greenberg--Hell's only psychotherapist. With Fred's stoic and perceptive guidance, the "talking cure" proves productive. That is until a dastardly terrorist act by a mysterious faction threatens the very nature of the Underworld. Will our self-deprecating hero get to the cause of his nagging "ennui?" Will Fred find his own redemption? And will our hero ever find peace, or at least a vacation? Combining Dante, Douglas Adams, and Freud, Damnation Diaries is equal parts horror comedy and character-driven drama, uniquely converging the look of bronze-age comics with sharp literary satire. The book's imaginative and surreal landscape serves as a perfect backdrop for caustic social commentary fit for our equally surreal times. The setting may be imaginary, but the urgent issues addressed are not: growing economic inequality, student debt, political crisis, terrorism, and the attempt to find peace under the most hostile of circumstances.

Peter Rostovsky is a Russian-born artist and writer who emigrated from the former Soviet Union as a political refugee in 1980. His paintings and fine art have been shown widely in the US and abroad and exhibited at museum venues such as PS1/MoMA, The Walker Art Center, MCA Santa Barbara, Artpace, The Blanton Museum of Art, S.M.A.K., as well as a host of private galleries. His writing--often under the pen name David Geers--has appeared in the magazines October, Fillip, BOMB, The Third Rail Quarterly, The Brooklyn Rail, Unbag, and Frieze, and spans cultural criticism, art writing, and fiction. Meanwhile, his illustrated fiction and comics-based work has appeared in the Third Rail Quarterly, Unbag, Topic, and in Devil's Due's much-publicized "Alexandria Ocasio-Cortez and the Freshman Force" where his contribution was highlighted by the New York Times, Vice, and other media outlets. Rostovsky teaches at NYU, Parsons New School, and Lesley Art + Design.