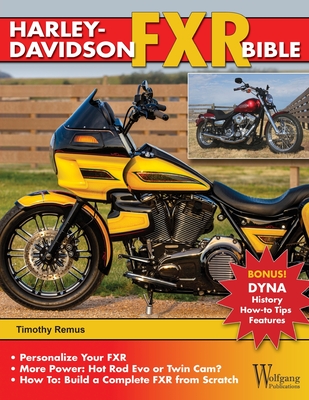 Harley-Davidson author, photographer, and historian Timothy Remus combines history, advice from pros, and hands-on how-to information and ideas as to where to buy the best combination of parts to build or modify your own Harley FXR.

Despite the number of FXRs being built and rebuilt, there is no FXR Bible--until now. The new book contains a history of the FXR, including the differences between various years and models; a gallery of FXRs, showing how a wide range of owners have maintained and modified their bikes; a how-to-build section designed to help FXR fans modify the bike in the garage, or build a brand-new FXR from scratch with aftermarket parts; and a Q&A section with professional builders--an opportunity to learn from the best.

In 1982 Harley-Davidson introduced the FXR series bikes based on a completely new frame. No longer would the motor and transmission be bolted directly to the frame, the new frame suspended the engine and transmission from rubber mounts. Not only were the new bikes smoother to ride, they were also the best handling bike to come off the Harley-Davidson assembly line. Though the first two years of FXR production came off the line with Shovelhead power, by 1984 all FXRs used the new Evo engine for power, and a 5-speed transmission and belt final drive to transmit that power to the rear wheel. It didn't take long for enthusiasts and customizers to appreciate the potential of the new model. Not only did it handle well but the frame would handle modified motors with twice the output of the stock Evos.

During its lifespan, the FXR chassis was used as the foundation for a number of models, everything from Low Riders and Super Glides to Sport Tourers and Police models. The FXR lived a good life--right up into the mid-1990s. And when Harley-Davidson replaced the bike with the new Dyna chassis, the troops in the trenches said NO. And Harley-Davidson did bring the FXR back for three separate short production runs.

When the FXR finally went out of production for good, the aftermarket filled the void with complete frame assemblies, as well as OEM style sheet metal. The FXR is a legendary motorcycle--a platform that remains in demand as the base for customs, high-speed road machines, and bare-bones hot rods.