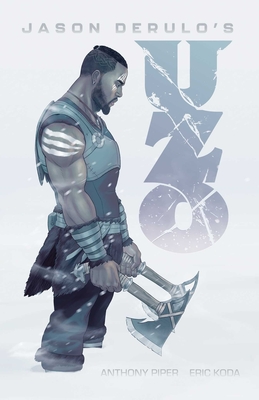 In the distant future, a mysterious asteroid accelerates the effects of climate change and turns the planet into a frozen wasteland where the last gasps of humanity fight over dwindling resources. A lone champion named Uzo becomes the last hope for both humanity and the planet!

Anthony Piper is a writer and illustrator who has worked on multiple IPs in the world of comics and animation, including X-Men, Guardians of the Galaxy, Axe Cop, and Major Lazer. His adult-themed indie comic Trill League—an infusion of comedy, hip-hop and fantasy—garnered him recognition in the creative industry, leading him to collaborate on projects for music artists such as SiR, Method Man, and 50 Cent. Born and raised on the Southside of Chicago, Anthony’s standout body of work is a reflection of his love for the cartoons, explicit comedy, and hip-hop music he grew up on.

Eric Koda is an artist and illustrator who works in comics and tv/film pre-production. He has worked at Marvel Comics, IDW and on multiple indie titles. Eric is also an adjunct art instructor at CSU San Bernardino. He currently resides in Redlands, CA.