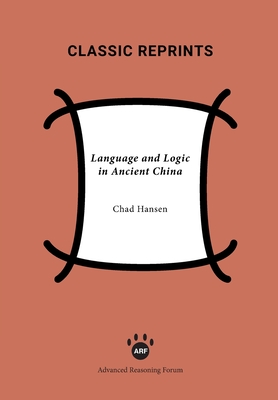 "Hansen shows that one tiny grammatical question... has profound implications for the understanding of Chinese philosophy. ...This is surely a decisive breakthrough ... a great success. His observations about Chinese thought in general are always stimulating and illuminating. A book which excites one to rethink things from the foundations." A. C. Graham

"An ambitious and provocative book concerning the relationship between language and thought in ancient China. ... a novel and powerful theory about the nature of classical Chinese language ... a better understanding of many issues in classical Chinese philosophy." P. J. Ivanhoe

" The] importance of this book lies ... in its engaging style, novel ideas, and rigorous argumentation, which can serve as a model for future work in Chinese philosophy. Hansen takes Chinese philosophy seriously as philosophy. For anyone tired of the superficial summaries or scholastic commentaries that so often characterize this field, Hansen's book will be a memorable and welcome change." Michael Martin