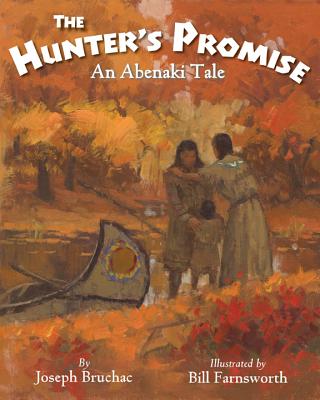 "Promise to remember me " was all the beautiful woman had ever said to the hunter. She had appeared from nowhere one day, when he had been lonely during the long winter hunting trip. Isolated in the vast wilderness of the northeast, he would only return to his village in the spring. Except that this year he would not be alone, because she had appeared. The hunter had quickly fallen in love with the mysterious woman, and together they had become their own little family. But when spring arrived and it was time to return to the village, she disappeared just as suddenly as she had arrived. Would he ever see his love again? The hunter didn t know, but he was sure he would keep his promise and never forget her. That is, until one day the chief's daughter cast a spell on him World-renowned storyteller Joseph Bruchac retells this traditional story of love, loyalty, trust, and magic, which can be found in various forms among many of the indigenous nations of the northeast, both Iroquoian and Algonquin. Join him and award-winning illustrator Bill Farnsworth, as they recount this ancient and unique Abenaki tale of keeping a promise to one's family and of the proper relationship of humans to the natural world.

Joseph Bruchac is a world-renowned Native author and storyteller who has written more than 120 books for both children and adults. His work is heavily influenced by his Abenaki ancestry, and he has worked extensively with other family members on projects involving the preservation of Abenaki culture and language. His poems, articles, and stories have appeared in over 500 publications, including National Geographic and Smithsonian Magazine. Bruchac s work has earned him numerous awards, including a Rockefeller Humanities Fellowship, a National Endowment for the Arts Writing Fellowship for Poetry, the Hope S. Dean Award for Notable Achievement in Children s Literature, and both the 1998 Writer of the Year Award and the 1998 Storyteller of the Year Award from the Wordcraft Circle of Native Writers and Storytellers. In 1999, he received the Lifetime Achievement Award from the Native Writers Circle of the Americas. Bruchac s most famous works include Keepers of the Earth: Native American Stories and Environmental Activities for Children (with Michael Caduto), Code Talker: A Book About the Navajo Marines, and Crazy Horse s Vision (illustrated by S.D. Nelson). Joseph Bruchac lives in Greenfield Center, NY. Bill Farnsworth is a nationally known illustrator, painter, and educator of art. He has illustrated over 50 books, including the beloved Kaya series for American Girl. Farnsworth s children s books have won accolades such as the Teachers Choice Award, the 2005 Patricia Gallagher Award, and the 2007 Volunteer State Book Award. In addition to his work on children s book, Farnsworth s paintings have won awards of excellence from the Oil Painters of America and the National Oil and Acrylic Painters Society. Bill Farnsworth currently lives with his wife in Venice, Florida."