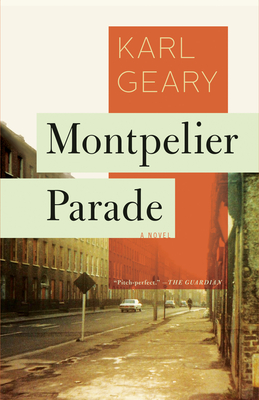 Geary's first novel is brave and deeply affecting. Brave because he tells the story in the second person. (You have to get used to it but you do.) Affecting because of the superbly crafted characters. In 1980's Dublin, Sonny, an aimless, working-class teen falls for Vera, a posh, older English woman. Sonny's life at school and at home is little more than a sad pattern to be endured. Vera represents beauty and worldliness although she is utterly unknowable to him. Their slowly developing relationship is ultimately touching, heartbreaking and doomed. — Stan Hynds

" An] accomplished debut. . . . The novel is narrated entirely in the second person, a stylistic choice that produces moments of intense intimacy." --The New Yorker "Geary enters the literary arena with a bang: this debut about an unconventional love affair between a teenage boy and an older woman is unassuming but gorgeously rendered." --Publishers Weekly, starred and boxed review Montpelier Parade is just across town, but to Sonny it might as well be a different world. Working with his father in the garden of one of its handsome homes one Saturday, he sees a back door easing open and a beautiful woman coming down the path toward him. This is Vera, the sort of person who seems destined to remain forever out of his reach. Hoping to cast off his loneliness and a restless sense of not belonging--at high school, in his part-time job at the butcher shop, and in the increasingly suffocating company of his own family--Sonny drifts into dreams of a different kind of life. A series of intoxicating encounters with Vera lead him to feel he has fallen in love for the first time, but why does her past seem as unknowable as her future? Unfolding over a bright, rain-soaked Dublin spring, Montpelier Parade is a rich, devastating debut novel about desire, grief, ambition, art, and the choices we must make alone.