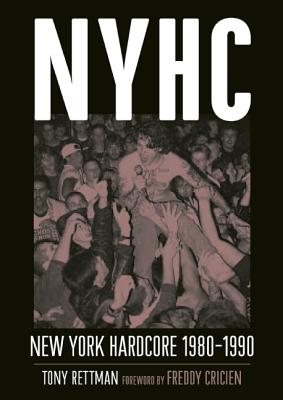 Known for its glamorous 1970s punk rock scene, New York City matched the grim urban reality of the 1980s with a rawer musical uprising: New York hardcore. As bands of misfits from across the region gravitated to the forgotten frontier of Manhattan's Lower East Side. With a a backdrop of despair, bands like Agnostic Front, Cro-Mags, Murphy's Law, and Youth of Today confronted their reality with relentlessly energetic gigs at CBGB, A7, and the numerous squats in the area.
Tony Rettman's ambitious oral history captures ten years of struggling, including the scene's regional rivalries with D.C. and Boston, the birth of moshing, the clash and coming to terms of hardcore and heavy metal, the straightedge movement, and the unlikely influence of Krishna consciousness.
With a foreword by Freddy Cricien of Madball, who made his stage debut with Agnostic Front at age seven, "NYHC" slams the sidewalk with savage tales of larger-than-life characters and unlikely feats of willpower. The gripping and sometimes hilarious narrative is woven together like the fabric of New York itself from over 100 original interviews with members of Absolution, Adrenalin O.D., Agnostic Front, Antidote, Bad Brains, Bloodclot, Bold, Born Against, Breakdown, Cause for Alarm, Citizen Arrest, Cro-Mags, Crumbsuckers, Death Before Dishonor, Even Worse, False Prophets, Don Fury, Gorilla Biscuits, H20, Heart Attack, Inhuman, Into Another, Irate, Judge, Kraut, Leeway, Life's Blood, Major Conflict, Max's Kansas City, Murphy's Law, Nausea, Nihilistics, Nuclear Assault, Numskulls, Outburst, Pro-Pain, Quicksand, Rat Cage Records, Raw Deal, Reagan Youth, Rorschach, S.O.D., Sacrilege, Savage Circle, Sheer Terror, Shelter, Shok, Sick of it All, Side by Side, Skinhead Youth, Straight Ahead, the Abused, the Cryptcrashers, the Mad, the Misfits, the Misguided, the Mob, the Psychos, the Ritz, the Stimulators, the Undead, Token Entry, Underdog, Urban Waste, Virus, Warzone, Youth of Today, and many, many more.
MOSH IT UP

Tony Rettman is a freelance music journalist whose work has appeared in "The Village Voice, Vice, The Wire, Philadelphia Weekly, Cleveland Scene, Arthur, Swindle, Signal to Noise, Mean, " and "Thrasher." At age 14 in the 1980s, he was the editor of "Common Sense" zine. He has provided liner notes for such artists as Hackamore Brick, Bored Youth, Beyond and many more. He is a contributing editor to DoubleCrossXX.com. In 2010, Revelation Records released his acclaimed first book, "Why Be Something That You're Not: Detroit Hardcore 19791985."

Freddy Cricien is the lead singer of Madball."