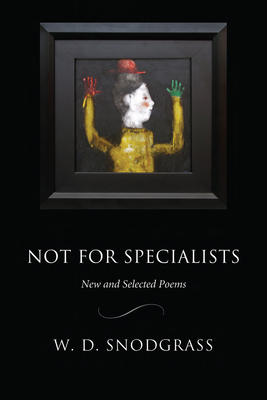 A great unsung American poet. Snodgrass helped spark the “confessional” movement in American poetry as a student in Robert Lowell’s workshop. “Heart’s Needle” is a painful, beautiful sequence about his divorce and losing custody of his daughter. He was a master craftsman who left the most a poet can really ask for, a handful of unforgettable lyric poems that will last the ages—“The pear tree lets its petals drop / Like dandruff on a tabletop.” “Sorting out letters…I happened to find / Your picture. That picture. I stopped there cold, / Like a man raking piles of dead leaves in his yard / Who has turned up a severed hand.”

Until the late 1970s, W. D. Snodgrass was known primarily as a confessional poet and a key player in the emergence of that mode of poetry in the late 1950s and early 1960s. Snodgrass makes poetry out of the daily neuroses and everyday failures of a man--a husband, father, and teacher. This domestic suffering occurs against a backdrop of more universal suffering which Snodgrass believes is inherent in the human experience. Not for Specialists includes 35 new poems complemented by the superb work he wrote in the Pulitzer Prize winning collection, Heart's Needle, along with poetry from seven other distinguished collections.

Seen from higher up, it makes its first move
in the low creekbed, the marshlands
down the valley, spreading across the open
hayfields, the hedgerows with their tops
still lit, laps the roadbed, flows over
lawns and gardens, past the house and up
the wooded hillside back behind us
till only some few rays still scythe
between the treetrunks from the far horizon
and are gone.

W. D. Snodgrass, born in Pennsylvania in 1926, is the author of more than 20 books of poetry, including The Fuehrer Bunker: The Complete Cycle (BOA, 1995); Each in His Season (BOA, 1993); and Heart's Needle (1959), which won the Pulitzer Prize for Poetry. His other books include To Sound Like Yourself: Essays on Poetry (BOA, 2002), After-Images: Autobiographical Sketches (BOA, 1999) and six volumes of translation, including Selected Translations (BOA Editions, 1998), which won the Harold Morton Landon Translation Award.

W. D. Snodgrass is author of over twenty books of poetry, two books of literary criticism, and six volumes of translation. Honors include an Ingram Merrill Foundation award, Harold Morton Landon Translation Award, and fellowships from The Academy of American Poets, Ford Foundation, Guggenheim Foundation, and National Endownment for the Arts. He retired from teaching in 1994.