Reason and Revolution: Hegel and the Rise of Social Theory (Paperback) 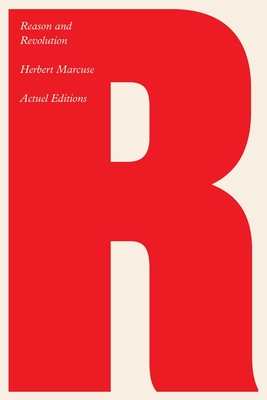 "Brilliant and penetrating ... the most important work which has opened up an understanding of Marx's humanism." - Erich Fromm

Reason and Revolution: Hegel and the Rise of Social Theory is the philosopher Herbert Marcuse's first major work in English - a masterful interpretation of Hegel's philosophy and the influence it has had on European political thought from the French Revolution to the present day.

Reason & Revolution, written in 1941, was the first Hegelian Marxist text to appear in English, the first systematic study of Hegel by a Marxist, and the first work in English to discuss the young Marx seriously. It introduced introduced Hegelian and Marxist concepts such as alienation, subjectivity, negativity, and the Frankfurt School's critique of positivism to a wide international audience.

Acclaimed for its profound and undistorted reading of Hegel's social and political theory, the appreciation of Reason and Revolution has remained high, more relevant now than ever before. There is no better guide than Marcuse to where we have been and to what we might expect.

The most influential radical philosopher of the 1960s, Marcuse's writings are as relevant to today's society as they were at the time they were written.

"We fell in love with Marcuse's mind, his method, his scholarship. We read everything he wrote... His book on Hegel and Marx, Reason and Revolution, was high on our list because we wanted to understand the intellectual origins of revolutionary Marxism." - Dan La Botz, author of A Troublemakers' Handbook: How to Fight Back Where You Work and Win

"A guiding figure to many social activists" - The New York Times

Herbert Marcuse (1898-1979) was a philosopher, sociologist, and political theorist. He studied at the University of Berlin and the University of Freiburg, and became a crucial figure at the Frankfurt Institute for Social Research, and of the Frankfurt School of social theory. He was forced to leave Germany in 1933, eventually settling in the United States, where he would spend much of his life and taught at many of the country's greatest schools and universities.

A Hegelian-Freudian-Marxist, Marcuse highlighted the cultural forms of repression and the role of technology and the expansion of the production of consumer goods in the maintenance of the stability of capitalism. His classic studies of capitalist society were important influences on the New Left of the 1960s and 1970s and his libertarian socialism remains an important intellectual resource.

Philosophical speculation seldom attracts headlines, let alone threats of death. Yet such was the fate that overtook Herbert Marcuse in the late 1960s, when he was catapulted into international controversy as a prophet of the revolutionary student movement. Among his major writings are Reason and Revolution, One-Dimensional Man, and Eros and Civilization.