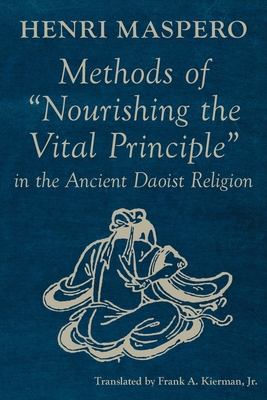 Methods of "Nourishing the Vital Principle" in the Ancient Daoist Religion is a tiré à part of Book IX of Henri Maspero's seminal work Taoism and Chinese Religion, the Revised Edition of which was published by Quirin Press in 2014 (ISBN: 978-1-922169-04-4).

Among the texts through which Maspero explores the Daoist practices of longevity before and during the Tang dynasty (618-907). The Collection of Books New and Old on the Absorption of Breath Gathered by the Master of Yanling (Yanling xiansheng ji xinjiu fuqijing 延陵先生集新 舊服氣經), probably compiled in the middle of the eighth century by an otherwise unknown figure, is a detailed account of the Daoist practice of "embryonic respiration" (taixi 胎息). In general, embryonic respiration is an attempt to gain the vitality of the fetus-in particular, to reverse the process of aging-through a set of techniques intended to re-create the breathing of an embryo in the womb. These techniques, as set out in the text, reflect the increasing empha- sis within Daoism in the late Tang dynasty on internal rather than external practices.

The Formula for the Use of Breath by Perfect Men of Mysterious Simplicity, Expounded by the Master of Great Respect (Daweiyi xiansheng xuansuzhenren Yongqi jue 大威儀先生玄素眞人 用氣訣) describes a preliminary practice. Adepts must do physical exercises, calm the mind through meditation, clack their teeth, swallow their own saliva, and visualize the breath traveling properly through the body. Those who perfectly and constantly follow this method for nine years will be able to "walk upon emptiness as one walks on substance, on water as if on earth."

After exploring the various breathing techniques, the second part of the book looks at the "Methods of Uniting Yin 陰 and Yang 陽 to Nourish the Vital Principle" and concludes with a section on Daoist gymnastic methods (daoyin 道引) used to help the Daoist adept to overcome the various internal obstacles and obstructions to the passage of breath.

As with all of Maspero's work, what renders his approach impeccable is the manner in which he employed and relied on original source material. Maspero (1883-1945) was the first Western scholar to study the vast and recondite compendium of Daoist writing, the Daozang, and explore its historic meaning. And, as Michael Loewe pointed out, "scholars still rely with the utmost confidence on his writings as a framework whose validity has outdated their most recent findings, and whose detail has in many cases not been bettered."