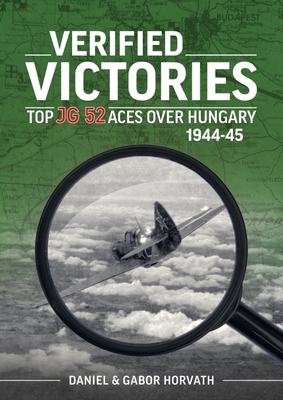 Victory or overclaim? That is the question

As new military archival materials began to surface internationally, it became necessary to update and correct some of the legendary chapters of aviation history including world records of the Luftwaffe's famous and most successful fighter unit, Jagdgeschwader 52. In this book the respected reader will find a fundamental analysis of the aerial victory claims of the top eight JG 52 fighter aces over Hungary throughout 1944-1945.

The method of analysis within this book is very simple: if a plane was shot down by a pilot, then the opposing side had to lose a corresponding plane. While it is true that Soviet aerial losses were inaccessible to most researchers for the past several decades, it is also true that this lack of information created a plethora of legends of the aerial war over the Eastern Front. Unfortunately that one-sided narrative, unable to be verified from the 'other' side, created a biased and 'alternative' aerial history.

In our post-archive era, the doors of many archives including that of the military archives of the Russian Federation have begun to open to researchers. This creates an opportunity to learn about an otherwise unattainable piece of history.

Since the authors, through their co-operation with the Szolnok Aircraft Museum, had access to the records of every Soviet aircraft lost over Hungary during the Second World War, a comparison of claims to losses could be made right down to the individual pilot-versus-pilot level. Plane to plane and face to face, these former enemies may be seen together for the first time in nearly eighty years.

The findings in this book and the authors' analysis and comparison overturns previously known statistics and accounts by verifying the aerial victories of famous pilots including Erich Hartmann, Gerhard Barkhorn, Helmut Lipfert and others.