Sports Heroes: Inspiring Tales of Athletes Who Stood Up and Out (Hardcover) 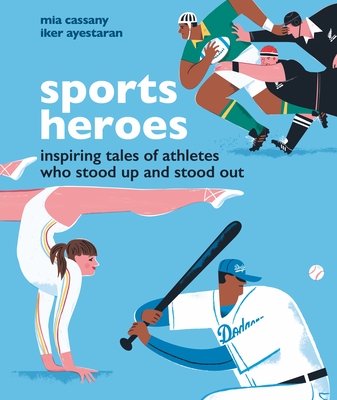 Introduce kids to these 16 inspirational people who have broken down barriers to revolutionize the world of sports.

These heroes pushed themselves beyond their own limits, took risks, and overcame prejudices like racism, sexism, and ableism to make it to the top of their field.

Discover why and how people such as Dick Fosbury (USA), Sonja Henie (Norway), and Gino Bartali & Fausto Coppi (Italy) became sport heroes. The stories featured inside remind you how important it is never to give up and to fight for what you truly believe in.

These inspiring victories remind us that it is possible to meet the challenges of life and make the world a better place for everyone.

Before Nadia Comăneci, it was believed by Olympic judges that no sports person could ever achieve perfection - a score of 10 - in a gymnastic routine. As far as they were concerned, there was no such thing as perfection; there were always little things that could be improved. The judges were very tough in their assessments and were convinced that nobody would ever make them change their minds.

But then a very young Comăneci got up on the bars and performed the most perfect routine the judges had seen in their lives. Comăneci received the first 10 in the history of the Olympic Games - and it would not be her last

It was quite an amusing moment - the scoreboards were only programmed to show three digits and couldn't show a 10. Comăneci's score had to be shown as 1.00, and the Dutch judge in charge of the scoring had to wave his arms and shout from the table: "It's a 10, it's a 10, not a 1 "

Fortunately, these days scoreboards are prepared for perfection.