Violet Fane: The Literary Identities of the 19th Century Poet and Novelist (Hardcover) 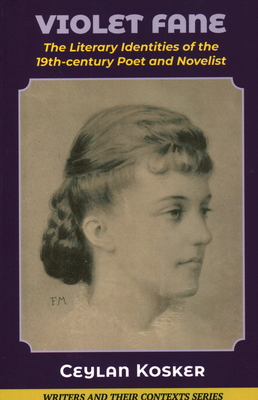 This is the first book-length study of the important poet and political writer Violet Fane (Lady Mary Montgomerie Currie, n e Lamb, 1843-1905). It recovers Fane's work to a central position in the literary canon.

Fane is shown as a relevant figure in the literary history of the nineteenth century: as a poet, a celebrity writer, and an ambassadress. The study also illustrates the tensions within her self-representations that stem from the limitations gender roles imposed on women, which arguably caused her serious political works to be trivialised.

In recovering Fane as a writer of many genres who engaged with political, artistic, and historical issues of her day, Dr. Kosker examines her literary identities in parallel with her life, which was itself an important source of inspiration for her writings.

A well-known figure in London society, Fane's coterie included Robert Browning, Algernon Swinburne, A. W. Kinglake, Alfred Austin, James McNeil Whistler, Lillie Langtry, and Oscar Wilde, who praised the oracular bent of Fane's opinions on 'the relation of art to nature' by saying that she 'live d] between Parnassus and Piccadilly'.

Fane was the eldest daughter of Charles James Savile Montgomerie Lamb (1816-1856) and Anna Charlotte Grey (?1824 -1880). As the heir of the baronetcy of Burville, Berkshire, and Beauport, Lamb was descended from two aristocratic families. Grey, on the other hand, was the daughter of a draper and an alleged smuggler, and was rumoured to have had gypsy forebears. Their orientalist acquaintances were the first ones to introduce Fane to the exotic east to which Fane often returned to in her poetry, and which form the sequence known as the 'Clara Poems'.

In London society Fane became well known as a great conversationalist and a woman of considerable wit. She took the name 'Violet Fane' from Benjamin Disraeli's novel, Vivian Grey (1826). After the appearance of her etchings of Alfred Lord Tennyson's 1830 poem, Mariana, published privately in 1863, Fane made her literary debut under her pseudonym with her first poetry collection, From Dawn to Noon in 1872. From then on, until her death in 1905, she published numerous poetry collections, three multiple-volume novels, translations of poems and memoirs of important figures in history.

Ceylan Kosker received her PhD in English Literature from Aberystwyth University in 2017. After completing her studies, she moved to Turkey, where she held a teaching fellow position at Bilkent University for two years. She is an assistant professor at Istanbul MEF university since September 2019. Her main area of expertise is nineteenth-century women's writing, with a particular emphasis on the liminal nature of female literary identity within the cultural and economic milieu of this period.