The Trial and Death of Socrates: With 32-page introduction, footnotes and Stephanus references by F.C. Church, translator (Aziloth Books) (Paperback) 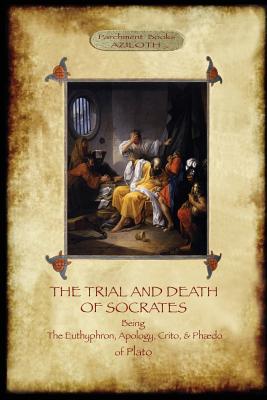 In 399 B.C., Socrates was tried for religious and political crimes: refusing to recognise the gods of Athens, introducing new deities, and corrupting the youth. The verdict was guilty as charged, the penalty - death by poisoning.

Despite growing up in Greece's "Golden Age" of liberalism and democracy, Socrates was not a democrat. Influencing young men with his idea that people needed direction from wise men rather than self-government, was likely perceived as a threat to the cherished Athenian republic. Socrates likened himself to a gadfly stinging the "lazy horse" of Athens and did this with zeal, believing his God-assigned purpose was to expose false wisdom as ignorance. Awareness of one's ignorance was a key first step towards true wisdom or virtue, he declared, emphasising that although he, too, was ignorant, he knew it. And that, he argued, was the reason the oracle of Delphi proclaimed "there was no man wiser than Socrates". Little wonder, then, that egos were pricked and enemies made.

Socrates did not record any of his work, and it was left to some of his young disciples - Plato, being the most famous - to give an account of their master's dialogues with Athenians from all walks of life. The Trial and Death of Socrates is a collection of four such dialogues - Euthyphron, Apology, Crito and Phaedo - covering the period from just before Socrates' trial through his last few days in prison, to his courageous death. The reader makes contact with the Socratic method of debate known as elenchus - an unwavering and incisive form of cross-examination that involved a series of questions and answers. For Socrates, definitions and rational, syllogistic argument were key tools in discussing and dissecting subjects such as piety, virtue, the immortality of the soul and the difference between right and wrong.

A misfit in his time, Socrates was arguably the world's first martyr for free speech, and one that passed on an enduring legacy of questioning societal norms.