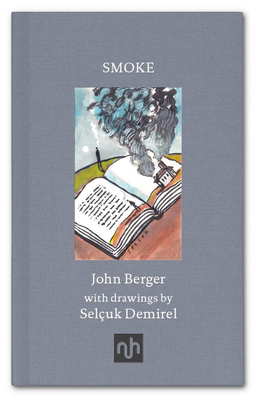 This posthumous book of the great Berger follows the format of the previous Cataract with lovely entrancing images by Selҫuk Demirel. A slight but enjoyable meditation on smoking--beautifully written, and wistfully meditating on both the social space it once had—a moment of friendly conversation, and the persistence of pollution from cars and factories that goes unchecked.

"Once upon a time, men, women and (secretly) children smoked."

This charming illustrated work reflects on the cultural implications of smoking, and suggests, through a series of brilliantly inventive illustrations, that society's attitude to smoke is both paradoxical and intolerant. It portrays a world in which smokers, banished from public places, must encounter one another as outlaws. Meanwhile, car exhausts and factory chimneys continue to pollute the atmosphere. Smoke is a beautifully illustrated prose poem that lingers in the mind.

Selçuk Demirel was born in Artvin, Turkey, in 1954. He trained as an architect and moved to Paris in 1978, where he still lives. His illustrations and books have appeared in many prominent European and American publications. Demirel's work ranges from book illustrations, magazine covers, children's books, and from postcards to posters.

"In these pages, Demirel rather brilliantly provides images of togetherness that make literal Berger’s language, albeit without sentimentalizing it; these pictures recall a world that once had coherent meaning...Berger and Demirel show that nearly anything can be part of shared experience...Smoke, [Berger] concludes, is a 'sign of mankind'—evidence not of man’s endurance but of the promise of companionship and stories shared." —Jonathon Sturgeon, Art in America

“In contemporary English letters John Berger seems to me peerless. Not since D. H. Lawrence has there been a writer who offers such attentiveness to the sensual world with responsiveness to the imperatives of conscience.” —Susan Sontag

“I love this small book of intricate insight.” —Michael Ondaatje, (on Cataract)

“In his ceaselessly inventive work, Selçuk often uses parts of the body in ways that are characteristically Turkish...as if the comedy of the human condition were there in the human body, in the melancholy of anatomy.” —John Berger, on Selçuk Demirel