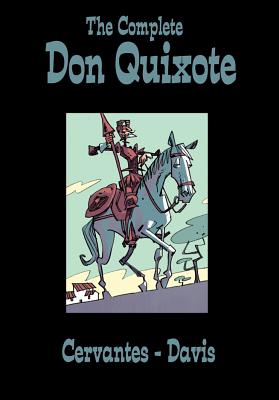 By Miguel de Cervantes, Rob Davis
$27.50
Hard to Find - May no longer be available

Beautifully drawn and always hilarious, this comic adaptation of the Man of La Mancha's misadventures remains true to the anarchic spirit of Cervantes' novel. A treat for fans and a great intro for young readers. — Charles Bottomley

More than 400 years ago, Spanish author Miguel de Cervantes (1547–1616) sent his irrepressible optimist of a hero out to tilt at windmills—and Don Quixote and his philosophical squire, Sancho Panza, still remain among the world’s most popular and entertaining figures, as well as the archetypes for the tall, thin straight man and his short, stocky comic sidekick. In this terrific adaptation of the Cervantes classic, Rob Davis uses innovative paneling and an interesting color palette to bring the Knight-Errant to life. This is sequential storytelling and art at its finest, as we follow Don Quixote on his search for adventure and chivalrous quests—and he will not be defeated by such foes as logic, propriety, or sanity.

Miguel de Cervantes was a celebrated Spanish Renaissance playwright, poet, and novelist. Rob Davis has drawn Judge Dredd and Dr. Who comics and worked as an illustrator for newspapers and children’s publishers. He lives in Dorset, England.