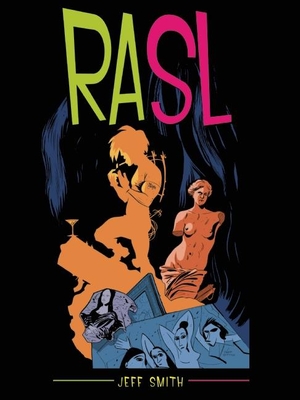 An almost complete departure from Smith's previous series; Bone. After waking up in a world that's not-quite-right, RASL takes readers on a thrill-ride art heist through multiple dimensions. While not quite as family friendly as his previous work, RASL cements Jeff Smith's place among the top of the list in independent comics.

This is a beautiful, dark, mixed-up series. It is science-fiction mixed with realism and made into one mad trip down the rabbit hole. Rasl’s adventures of trying to protect himself from those who would stop him, survive “Drifting” (jumping into parallel worlds) and most importantly, protecting loved ones makes him the quintessential anti-hero. Mature images and themes. — Jeanette

Winner of the Eisner Award for Best Graphic Album 472 page hardcover in full color A New York Times Bestseller, RASL is Jeff Smith's follow up to his epic fantasy BONE. A tightly wound mixture of science fiction, noir and conspiracy theories, RASL is a gritty, hard-boiled tale of an inter-dimensional art thief caught between dark government forces and the mysterious powers of the universe itself. When Rasl, a thief and ex-military engineer, discovers the lost journals of Nikola Tesla, he bridges the gap between modern physics and history's most notorious scientist. But his breakthrough comes at a great personal price. In this twisting tale of intrigue and betrayal, Rasl finds himself in possession of humankind's deepest, most dangerous secret. Originally serialized in black & white comic books and graphic novels, the award winning completed novel is embellished with muted, smoky color by Steve Hamaker and Jeff Smith. Praised by The Village Voice, USA Today, NPR, Physics Today, Booklist, The Onion/AV Club, Paste, Publishers Weekly and more.

Jeff Smith is the author/cartoonist of the BONE graphic novels which won numerous awards around the world, including 11 Eisner Awards & 9 Harvey Awards, the Alph Art for Best Foreign Book in France, as well as awards in Spain, Germany, and Italy before being chosen to launch the first graphic novel imprint for children by Scholastic in 2005. In 2009 Smith was the subject of an Emmy Award winning documentary called The Cartoonist: Jeff Smith, BONE, and the Changing Face of Comics. Most recently, Smith was Guest Editor of The Best American Comics 2013.