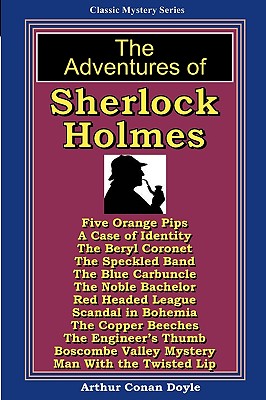 Sir Arthur Conan Doyle's first twelve Sherlock Holmes short stories published individually by the British Strand Magazine in July of 1981. Shortly thereafter, they were published as shown in this book, and have gone on to become classics and were followed up by another 11 stories in the "Memoirs of Sherlock Holmes," also available on Amazon from Magic Lamp Press. The twelve stories in this book include: Five Orange Pips A Case of Identity The Beryl Coronet The Speckled Band The Blue Carbuncle The Noble Bachelor Red Headed League Scandal in Bohemia The Copper Beeches The Engineer's Thumb Boscombe Valley Mystery Man With the Twisted Lip This is the book that Holmes aficionados usually re-read every few years.

Sir Arthur Conan Doyle began his professional career as an eye doctor, and In many ways, Sherlock Holmes resembles Dr. Joseph Bell, one of Doyle's teachers at the medical school of Edinburgh University. Doyle was seventeen years old when he first met Dr. Bell, and the doctor left an indelible impression upon the young student. This is how Conan Doyle described Bell: A "thin wiry, dark" man, "with a high-nosed acute face, penetrating gray eyes, and angular shoulders. Dr. Bell would sit in his receiving room and diagnose the people as they came in, before they opened their mouths. He would tell them details of their past life; and hardly ever make a mistake." Doyle dedicated The Adventures of Sherlock Holmes to Dr. Bell, writing to him "You are yourself Sherlock Holmes and well you know it." To this day, there are die-hard members of "The Baker Street Irregulars," who firmly believe that Holmes was a real person. Author Gene Grossman created his own version of Holmes, in the form of a twelve-year-old Chinese girl who is a brilliant computer whiz, solving cases for her legal guardian, an attorney. Like the Holmes Adventures, all twelve of Gene Grossman's stories are in the "Peter Sharp Legal Mystery Series," also available on Amazon.com. One of them, "The Magician's Legacy," has been called the finest locked-room mystery of this century. Details of all twelve can be seen at www.legalmystery.com