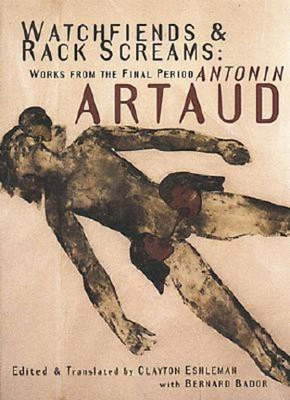 Including the fabled text "To Have Done with the Judgment of God," this collection compiles the scatalogical writings of Artaud's final years

Clayton Eshleman's translations are the finest and most authentic which have yet been made from Artaud's writing. Artaud's final work is his strongest and most enduring, and this collection has been wisely selected and magnificently realized. Artaud is being taken into the 21st century. -Stephen Barber

Among Antonin Artaud's most brilliant works are the scatological glossolalia composed in the final three years of his life (1945-48), during and after his incarceration in an asylum at Rodez. These represent some of the most powerful outpourings ever recorded, a torrent of speech from the other side of sanity and the occult. In this collection, the most complete representation of this period of Artaud's work ever presented in English, and the first new anthology of Artaud published in the US since Helen Weaver's 1976 Selected Writings, cogent statements of theory are paired with the raving poetry of such pieces as "Artaud the Momo," "Here Lies" and "To Have Done with the Judgment of God." These are translated with drama and accuracy by Clayton Eshleman, whose renditions of Vallejo and C saire have won widespread acclaim, including a National Book Award.