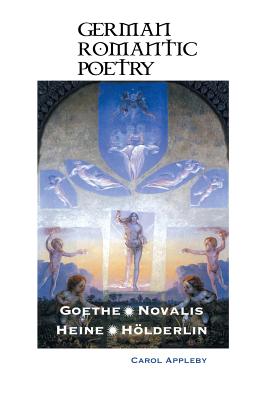 The book includes lengthy extracts from the poetry of German Romanticism, with a selection of poems by Goethe, Novalis, H lderlin and Heine at the back. This new edition (the 4th) has been revised.

EXTRACT FROM THE FRIEDRICH HOLDERLIN CHAPTER

Friedrich H lderlin believed in the notion of the poet as shaman, a vates, a prophet. As he wrote in 'An die Deutschen' ('To the Germans'), 'sweet it is to divine, but an affliction too'. And he believed in his poetic world, as poets have to: 'H lderlin's world was one in which he alone believed', wrote Alessandro Pelegrini. His poetry is marked by a movement towards bliss, the ecstasy of the shaman, which H lderlin does not hide. Rather, he cultivates it scrupulously. His lyrics are pure lyrics, set in the Orphic mode, that way of making poetry that comes from Orpheus, the ancient deity of shamanic poetry.

Friedrich H lderlin's poetry, especially his early lyrics, is powerfully shamanic; it is full of shamanic imagery, as is the early poetry of Percy Bysshe Shelley or Francesco Petrarch. In H lderlin's art we find images of light, of bliss, of motion, of revelation, all shamanic/ religious motifs. Heinrich Heine's view of the poet as shaman was more political, aware of the role of the poet in societal revolutions: 'Our age is warmed by the idea of human equality, and the poets, who as high priests do homage to this divine sun, can be certain that thousands kneel down beside them, and that thousands weep and rejoice with them'.