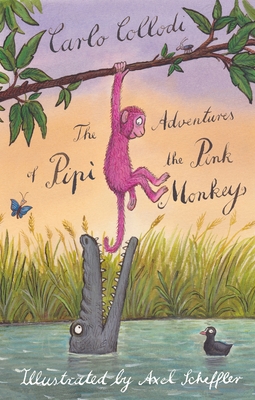 A rediscovered gem from Italian children literature, written by the author of Pinocchio, translated and expanded by Alessandro Gallenzi and illustrated by Axel Scheffler (the illustrator of the Gruffalo).

Pipì isn't like his four brothers or the other young monkeys living in the forest of Hullabaloo: he has bright-pink fur, a mischievous character and a rebellious streak that lands him into all sorts of scrapes. In this story, an expanded version of Collodi's original tale, we see him lose his tail to an ancient crocodile, end up as a valet to a young master, fall into the hands of flying bandits and become emperor of a tribe of apes.

Collodi wrote this story immediately after Pinocchio, and the little monkey's adventures present clear similarities, both in terms of themes and characters, with his more celebrated masterpiece. This rediscovered gem of Italian literature, beautifully illustrated by Axel Scheffler and preserving all of Collodi's trademark wit and linguistic crispness, will delight and enthrall a new generation of children.

Carlo Collodi (born Carlo Lorenzini in Florence, 1826) was an Italian children's writer and most famous for his children's novel The Adventures of Pinocchio. Involved in political matters, he wrote satires during the Wars of Independence, going on to found a satirical newspaper Il Lampione (The Streetlight). He won fame with a novel, In Vapore, before focusing on children's literature as a way to explore political allegory. He began writing Storia di un burattino (Story of a Marionette), serialised in Il Giornale dei Bambine (The Children's Newspaper). This story would later come to be known as The Adventures of Pinnochio.
Collodi died in his native city in 1890, aged 63.