Who Owns the Wind?: Climate Crisis and the Hope of Renewable Energy (Paperback) 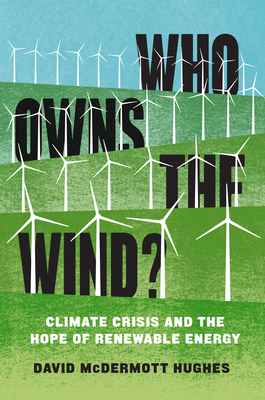 Why the wind, and energy it produces, should not be private property

In the lives of a community freighted with centuries of exploitation—people whom the author comes to know intimately—clean power and social justice fit together only awkwardly. A green economy will require greater efforts to get ordinary people such as these on board. Aesthetics, livelihood, property, and, most essentially, the private nature of wind resources—all these topics must be examined with fresh eyes.

David Hughes is professor of Anthropology at Rutgers, the State University of New Jersey. He has written articles for Boston Review and three previous books, including Energy without Conscience: Oil, Climate Change, and Complicity (2017). As an activist, Hughes has served as president of his faculty union and as a member of the Climate Task Force of the American Federation of Teachers.

“David Hughes it doing some of the most innovative thinking and writing about energy democracy in the world. The movements for climate justice are in his debt.”
– Naomi Klein, author of This Changes Everything

“No task is more crucial than building out renewable energy around the world—but it can’t happen at the speed it must unless communities embrace windmills and solar panels. And as this frank, straightforward and clarifying book makes clear that will happen only if and when we have a real stake in these assets. The author’s proposals are ambitious but also modest and logical, and they are deeply grounded in real life observation. This is a book to be reckoned with.”
– Bill McKibben, author of The End of Nature

“Who Owns the Wind? shows that we will win fossil fuel abolition only if we succeed in transforming renewable power into a common resource, one that tangibly benefits and enfranchises the communities where turbines and other infrastructure is located. Hughes’s book should be required reading for all energy democracy advocates and environmental justice activists.”
– Ashley Dawson, author of Extreme Cities

“David Hughes provides a nuanced and complex assessment of the perils and promises of developing renewable energy. Who Owns the Wind? is a joy to read, connecting large scale global forces with the lives and stories of individuals. This is a work full of insight, critical analysis, and even a modicum of hope.”
– Richard York

“Until reading David Hughes’ exquisitely written yet hard-hitting and crusading book, I hadn’t realized how much hangs on the wind—and on who will own it. From one angle it is an eco-socialist manifesto, pushing its message with an unswerving passion: build millions of wind turbines, yes, but the people must own the wind. From another, it is a sumptuous volume that sparkles with moments of almost synaesthetic beauty—while reading it you feel the Andalusian wind brush your skin…. Ultimately, the author finds sparks of hope among his ethnographic and literary subjects: the individuals and the picaresque traditions of southern Spain. For those who would like our planet to remain habitable, this is a must-read.”
– Gareth Dale

“Eloquent and incisive, this is an important contribution to climate change discourse.”
—Publishers Weekly

“As radical as the most ambitious of the green revolution’s plans.”
—Anna Aslanyan, Times Literary Supplement