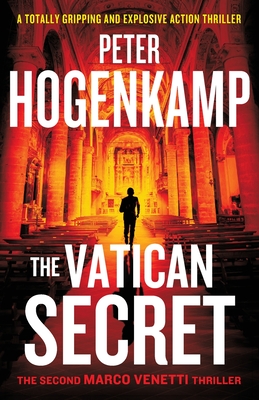 There is a nuclear weapon in the hands of the Vatican City's deadliest enemy. And time is running out to stop an attack...

Marco Venetti, the only man the pope trusts, has tracked down the traitor who nearly succeeded in his mission to kill the pope. But the traitor holds a crucial piece of information: the name of the Russian mafioso in possession of a nuclear bomb.

Forced to work with a man he despises to prevent a deadly explosion, Marco sets a trap for the Russians. Inside the stone walls of an ancient castle in Portugal, surrounded by high mountains, he waits to ambush his target. But a double-cross ruins everything and he must flee, alone and without backup, leaving a trail of death and destruction behind.

All Marco knows is that the attack is imminent. And that to prevent it, he must enter a deadly game of cat-and-mouse that will take him across the continent, on land and by sea. With time running out, he will stop at nothing to uncover the truth. Because the secrets inside the Vatican may be the deadliest threat of all...

The Vatican Secret is an explosive thriller full of treachery, international conspiracy and non-stop action. Fans of Joel C. Rosenberg, Tom Clancy and Steven Konkoly will be completely gripped.

"Wow... So many twists and turns that keep you guessing... Captures your attention and doesn't let go till the end." TB Honest, ⭐⭐⭐⭐⭐

"Grabs you on the first page and is powered by non-stop action and a taut, emotional narrative... A real page-turner " Goodreads Reviewer, ⭐⭐⭐⭐⭐