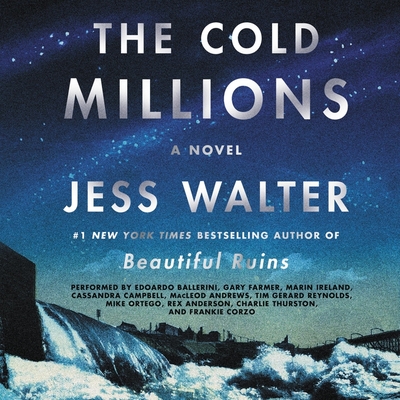 Labor unrest, peaceful and deadly, provides the backdrop for this engrossing novel about two brothers, both drifters anchored only to each other, and a feisty young Irish woman on a crusade. Although Elizabeth Gurley Flynn is only 19-years-old, her name strikes fear into the hearts of the millionaires who live in splendor off the bone-grinding labor of the men who work the mines in Washington State at the turn of the 20th century. She faces formidable odds: Hired thugs and killers, corrupt police officers, and betrayals within her own organization. Walter's vivid descriptions of Spokane, a growing city unable to completely shed the trappings of a roughshod frontier town, emerge to the reader like literary photographs. His assorted characters, all toting their own flaws and weaknesses, are powerfully drawn and believable. This is a wonderfully entertaining novel by the author of Beautiful Ruins and the social issues it examines are still relevant in today's world.

“The gorgeous writing, vivid setting, compelling characters, and engrossing story aren’t even the best parts of this novel. Instead, I just keep marveling at how Jess Walter takes events from history to illuminate our present while keeping them rooted in their own time, from the labor movement to class, race, and gender equality and civil rights issues, to protests and freedom of speech. The northwest in 1909 has never been so relevant. Beautiful Ruins was a hard act to follow but, amazingly, Walter manages it with aplomb.”
— Ariana Paliobagis, The Country Bookshop, Southern Pines, NC

An intimate story of brotherhood, love, sacrifice, and betrayal set against the panoramic backdrop of an early twentieth-century America that eerily echoes our own time, The Cold Millions offers a kaleidoscopic portrait of a nation grappling with the chasm between rich and poor, between harsh realities and simple dreams.

The Dolans live by their wits, jumping freight trains and lining up for day work at crooked job agencies. While sixteen-year-old Rye yearns for a steady job and a home, his older brother, Gig, dreams of a better world, fighting alongside other union men for fair pay and decent treatment. Enter Ursula the Great, a vaudeville singer who performs with a live cougar and introduces the brothers to a far more dangerous creature: a mining magnate determined to keep his wealth and his hold on Ursula.

Dubious of Gig's idealism, Rye finds himself drawn to a fearless nineteen-year-old activist and feminist named Elizabeth Gurley Flynn. But a storm is coming, threatening to overwhelm them all, and Rye will be forced to decide where he stands. Is it enough to win the occasional battle, even if you cannot win the war?

Featuring an unforgettable cast of cops and tramps, suffragists and socialists, madams and murderers, The Cold Millions is a tour de force from a "writer who has planted himself firmly in the first rank of American authors" (Boston Globe).