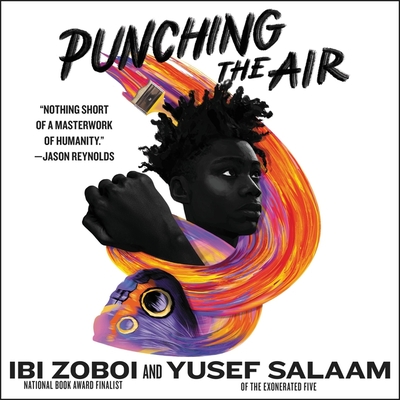 “When 16-year-old Amal is wrongfully imprisoned, we not only witness but are swept up in verse as his world darkens with each loss. He loses dreams, friendships, and hope, and makes a final stand for his humanity. The depth of his pain and the betrayal of educators in his life who are supposed to support him is so palpable that, at times, I had to put it down. The beauty comes when his art and self-expression become his salvation. This book is a window that every educator — and, really, every reader — should be made to look through.”
— Destinee Hodge, East City Bookshop, Washington, DC

From award-winning, bestselling author Ibi Zoboi and prison reform activist Yusef Salaam of the Exonerated Five comes a powerful YA novel in verse about a boy who is wrongfully incarcerated. Perfect for fans of Jason Reynolds, Walter Dean Myers, and Elizabeth Acevedo.

The story that I thought

didn't start on the day

Amal Shahid has always been an artist and a poet. But even in a diverse art school, he's seen as disruptive and unmotivated by a biased system. Then one fateful night, an altercation in a gentrifying neighborhood escalates into tragedy. "Boys just being boys" turns out to be true only when those boys are white.

The story that I think

will be my life

Suddenly, at just sixteen years old, Amal's bright future is upended: he is convicted of a crime he didn't commit and sent to prison. Despair and rage almost sink him until he turns to the refuge of his words, his art. This never should have been his story. But can he change it?

With spellbinding lyricism, award-winning author Ibi Zoboi and prison reform activist Yusef Salaam tell a moving and deeply profound story about how one boy is able to maintain his humanity and fight for the truth, in a system designed to strip him of both.