The Wonders: Lifting the Curtain on the Freak Show, Circus and Victorian Age (MP3 CD) 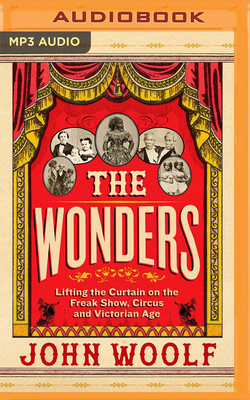 The freak flag flew high throughout the Victorian Age: the Queen herself was enthralled by General Tom Thumb. Meanwhile, the Siamese Twins, the Bearded Lady, giants, and other unusual personages were paraded by the likes of P.T. Barnum, and carnivals, sideshows, and midways thronged with spectators. Woolf strips away the bluster to reveal authentic people trapped in alarming bodies, who ought to be remembered not as freaks, but wonders. — Mike Hare

The Wonders is a radical new history of the Victorian age: meet the forgotten and extraordinary freak performers whose talents and disabilities helped define an era.

On both sides of the Atlantic, this meeting marked a tipping point in the 19th century - the age of the freak was born.

Bewitching all levels of society, it was a world of astonishing spectacle - of dwarfs, giants, bearded ladies, Siamese twins and swaggering showmen - and one that has since inspired countless novels, films and musicals.

But the real stories (human dramas that so often eclipsed the fantasy presented on the stage) of the performing men, women and children have been forgotten or marginalised in the histories of the very people who exploited them.

In this richly evocative account, Dr John Woolf uses a wealth of recently discovered material to bring to life the sometimes tragic, sometimes triumphant, always extraordinary stories of people who used their (dis)abilities and difference to become some of the first international celebrities.

And through their lives we discover afresh some of the great transformations of the age: the birth of show business, of celebrity, of advertising, of 'alternative facts'; while also exploring the tensions between the power of fame, the impact of exploitation and our fascination with 'otherness'.