Group: How One Therapist and a Circle of Strangers Saved My Life (CD-Audio) 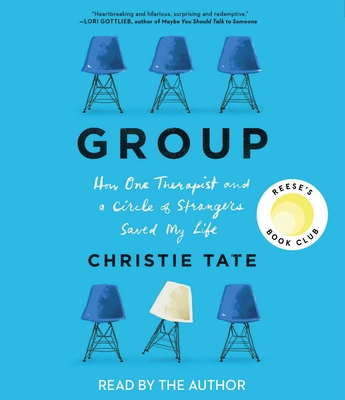 Sure, I'll TALK TO SOMEONE (Lori Gottlieb's bestseller is a great comp), but I will never do GROUP. But I ravenously read about it. Christie Tate did it, does it, and tells us everything. Brilliant and successful professionally, Tate desired what, for her, seemed as unattainable as the holy grail. Taking us into the room where it happened, Tate introduces us to the group that accompanied her on her quest. An amazing memoir that is as entertaining as it is heartbreaking. — Stan Hynds

What an incredibly powerful, moving read. I could relate to a lot of Christie's words and felt the emotions behind many of the scenes; they kept me wondering what happened next. The journey that Christie went through, the ups and downs, the struggle to get to where she wanted to be. She even mentions how the process of therapy isn’t a linear line of progress and you will hit bottoms you never knew could exist before finally finding your peace. You just have to be stubborn enough to push forward. This book is not for the easily disturbed reader, with mentions of anxiety, depression, suicide, eating disorder(s), sex addiction, and cheating. I both laughed and cried with this book. Group certainly gave me a lot to think about my own life and consider. This will be an impactful book for years to come. — Jules Wagner

“I cannot recommend this book enough! Group reads like a novel while also being incredibly insightful. Christie Tate is able to articulate a reality that I, and I’m sure others, haven’t quite been able to express to those closest to us. This book will help people realize that there are things they haven’t let themselves face yet, but it will also show them that their feelings are normal and natural. I, for one, am going to recommend this from now on to anyone I think might benefit from Tate’s journey, which I think will be just about anyone.”
— Sterling Miller, Ferguson Books & More, Grand Forks, ND

The refreshingly original and “startlingly hopeful” (Lisa Taddeo) debut memoir of an over-achieving young lawyer who reluctantly agrees to group therapy and gets psychologically and emotionally naked in a room of six complete strangers—and finds human connection, and herself.

Christie Tate had just been named the top student in her law school class and finally had her eating disorder under control. Why then was she driving through Chicago fantasizing about her own death? Why was she envisioning putting an end to the isolation and sadness that still plagued her despite her achievements?

Enter Dr. Rosen, a therapist who calmly assures her that if she joins one of his psychotherapy groups, he can transform her life. All she has to do is show up and be honest. About everything—her eating habits, childhood, sexual history, etc. Christie is skeptical, insisting that that she is defective, beyond cure. But Dr. Rosen issues a nine-word prescription that will change everything: “You don’t need a cure. You need a witness.”

So begins her entry into the strange, terrifying, and ultimately life-changing world of group therapy. Christie is initially put off by Dr. Rosen’s outlandish directives, but as her defenses break down and she comes to trust Dr. Rosen and to depend on the sessions and the prescribed nightly phone calls with various group members, she begins to understand what it means to connect.

“Often hilarious, and ultimately very touching” (People), Group is “a wild ride” (The Boston Globe), and with Christie as our guide, we are given a front row seat to the daring, exhilarating, painful, and hilarious journey that is group therapy—an under-explored process that breaks you down, and then reassembles you so that all the pieces finally fit.

Christie Tate is the author of the New York Times bestseller Group, which was a Reese’s Book Club selection. She has been published in The New York Times, The Washington Post, Chicago Tribune, McSweeney’s Internet Tendency, and elsewhere, and she lives in Chicago with her family.

Christie Tate is the author of the New York Times bestseller Group, which was a Reese’s Book Club selection. She has been published in The New York Times, The Washington Post, Chicago Tribune, McSweeney’s Internet Tendency, and elsewhere, and she lives in Chicago with her family.