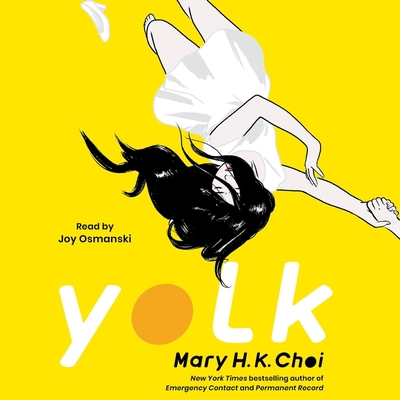 Two estranged sisters live in New York; the younger, Jayne, is in college and the older, June, has a high-powered finance job. Jayne is struggling - skipping classes, drinking a lot, dealing with a very graphically described eating disorder. The book starts with June showing up at the bar where Jayne is hanging out, and telling her she wants to help her get her life on track. June also tells Jayne that she's been diagnosed with uterine cancer. Jayne moves into June's fancy apartment and they start taking care of each other and repairing their relationship. One day a medical bill addressed to Jayne arrives at June's apartment. Jayne discovers that June was fired from her job and lost her insurance - she subsequently stole Jayne's identity, and the only reason she's been helping her is because if Jayne flunks out of school, June will lose access to her student health insurance. This has long-term consequences - if Jayne ever has kids, she will have to take someone else's identity, because her medical record will show that she's had a hysterectomy. This book is seriously fantastic. It's a disturbing read given the way the eating disorder is described and how often the characters act as the worst, most destructive versions of themselves, but is so well written that it's impossible to put down. — Nadja Tiktinsky

“What a sharp, terrific book. I love how Choi develops the characters with perfect details. The whole world of Yolk is beautifully built, from the vision of New York City through the eyes of both sisters to the return home to Texas, and every space in between. This family, these sisters — I’m rooting for them.”
— Rachel Barry, WORD Bookstores, Brooklyn, NY

From New York Times bestselling author Mary H.K. Choi comes a funny and emotional story about two estranged sisters and how far they'll go to save one of their lives--even if it means swapping identities.Jayne and June Baek are nothing alike. June's three years older, a classic first-born, know-it-all narc with a problematic finance job and an equally soulless apartment (according to Jayne). Jayne is an emotionally stunted, self-obsessed basket case who lives in squalor, has egregious taste in men, and needs to get to class and stop wasting Mom and Dad's money (if you ask June). Once thick as thieves, these sisters who moved from Seoul to San Antonio to New York together now don't want anything to do with each other. That is, until June gets cancer. And Jayne becomes the only who can help her. Flung together by circumstance, housing woes, and family secrets, will the sisters learn more about each other than they're willing to confront? And what if while helping June, Jayne has to confront the fact that maybe she's sick, too?