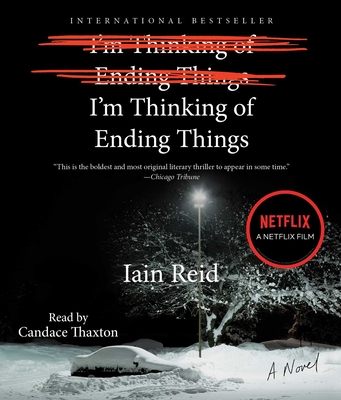 Jake and his girlfriend are driving to visit Jake's parents on their secluded farm during a blizzard. What follows is a bizarre psychological thriller that will ensnare you until the final sentence. An exploration of the psyche, a plunge into fearful depths, this is literary fiction at its best. — Amy Palmer

Amazing, edge-of-your seat experimental fiction. I'm not sure a review will really do it any service. This slim thriller is really an experience that deserves to be read in one or two sittings, letting the suspense build gradually.
Jake and his girlfriend are early in their relationship, but as his girlfriend narrates, she's already planning on ending it. She turns this thought over and over in her mind, while reminiscing on a snowy drive to Jake's parent's house. It's going to be one of those always-awkward "meet the parents" kind of dinners, and who looks forward to those?
Not everything is as it seems, though. Jake's parents are an unsettling sort of abnormal, and their house is creepy in the way that rural old farmhouses always are. Everything just feels a bit off, making the narrator even more ready to get out of this house and the relationship.
During their journey, the couple stops for an unexpected detour and things break down. Is Jake really what he seems to be? His parents? The narrator? Why is everyone so...off? What is really going on here? — Chris Linendoll

Looking for a strange, twisted read? You found it!! — Jess Hanlon

A young woman is certain that her relationship with an introverted scientist is destined for failure after meeting his parents at their isolated farm. During the trip back home, as a snowstorm increases in ferocity, she finds herself abandoned in a school where the sole occupant seems to be a tall, thin man who doesn't look at all friendly. This compact, cerebral thriller has a sly way of delving into the deepest of the reader's fears. — Alden Graves

A young woman travels with her new boyfriend to his parents' farm. It's in the middle of nowhere. It's the middle of winter. She wants to know him a little better. Because, if she likes him better, nothing has to end. — Mike Hare

“With his debut novel, Reid sets an extremely high bar for all future psychological thrillers. The entire story takes place in little over 24 hours as Jake and his girlfriend travel to meet and have dinner with his parents. Narrated by the unnamed girlfriend, something unsettling surfaces early and builds with the passage of every page. Readers will become riveted, reading faster and faster as the 'unsettling' becomes frightening, and then terrifying. Recommended for all who enjoy a good mind-twisting scare!”
— Nancy Simpson-Brice, The Book Vault, Oskaloosa, IA

Now a Netflix original movie, this deeply scary and intensely unnerving novel follows a couple in the midst of a twisted unraveling of the darkest unease. You will be scared. But you won’t know why…

I’m thinking of ending things. Once this thought arrives, it stays. It sticks. It lingers. It’s always there. Always.

Jake once said, “Sometimes a thought is closer to truth, to reality, than an action. You can say anything, you can do anything, but you can’t fake a thought.”

And here’s what I’m thinking: I don’t want to be here.

In this smart and intense literary suspense novel, Iain Reid explores the depths of the human psyche, questioning consciousness, free will, the value of relationships, fear, and the limitations of solitude. Reminiscent of Jose Saramago’s early work, Michel Faber’s cult classic Under the Skin, and Lionel Shriver’s We Need to Talk about Kevin, “your dread and unease will mount with every passing page” (Entertainment Weekly) of this edgy, haunting debut. Tense, gripping, and atmospheric, I’m Thinking of Ending Things pulls you in from the very first page…and never lets you go.

Iain Reid is the author of two critically acclaimed, award-winning books of nonfiction. His internationally bestselling debut novel, I’m Thinking of Ending Things, has been published in more than twenty countries. Oscar-winner Charlie Kaufman is writing and directing a film based on the novel, which Reid will co-produce. His second novel, Foe, was an instant bestseller and feature film rights have been acquired by Anonymous Content, with Reid set to executive produce. Follow him on Twitter @Reid_Iain.