The Second Summer of Love : How Dance Music Took Over the World (Paperback) 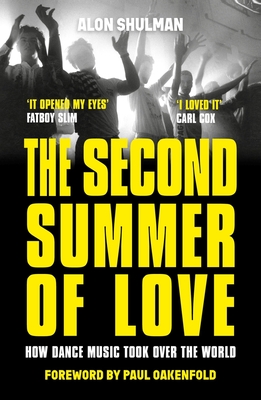 The birth of acid house and club culture, as told by those who were there

In 1987, four friends from London, Paul Oakenfold, Danny Rampling, Nicky Holloway and Johnny Walker, took a week-long holiday to Ibiza. What they saw there, and brought back home, would give rise to a new global music and counterculture movement.

As Thatcherism held the nation tight in its grip, something unusual was happening across Britain's dancefloors. People were dressing down, not up, to go out. And they were dancing right through the night in warehouses and fields. Acid house had arrived and given an entire generation a voice, while the powers that be struggled to smash the scene. But peace, love and unity would go on to win the day and spread the dance music message to every corner of the world.

In The Second Summer of Love, author and dance music promoter Alon Shulman uses exclusive contributions from the world's biggest DJs, including Paul Oakenfold, Carl Cox, Fatboy Slim, Moby and Danny Rampling to faithfully recreate the story of the summers of 1988 and 1989, and chart the birth and rise of dance music and club culture.

Complete with stunning photographs, this is the authentic account of what really happened in that glorious period - from the politics and the music to the drugs and the fashion - told by the people who helped make it happen, as they bring to life the underground scene which would go on to alter the course of global youth culture forever.

Alon Shulman started out as a jazz and funk DJ in London's West End at the dawn of the Second Summer of Love, and has since gone on to become a multi-award-winning festival, club and live experience promoter and producer who has worked with many of the world's biggest DJs and live acts. Utilizing his vision and expertise, he acts as special advisor to artists, individuals, brands and organizations. Owner of the pioneering dance music brand Universe™, Alon specializes in creating unique, entertainment-driven experiences. He lives in London with his wife and three children.