Albertus Magnus and the World of Nature (Medieval Lives) (Hardcover) 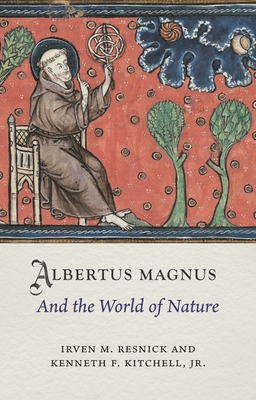 The first comprehensive English-language biography of Albert the Great in a century.

As well as being an important medieval theologian, Albertus Magnus (Albert the Great) also made significant contributions to the study of astronomy, geography, and natural philosophy, and his studies of the natural world led Pope Pius XII to declare Albert the patron saint of the natural sciences. Dante Alighieri acknowledged a substantial debt to Albert’s work, and in the Divine Comedy placed him equal with his celebrated student and brother Dominican, Thomas Aquinas.

In this book, the first full, scholarly biography in English for nearly a century, Irven M. Resnick and Kenneth F. Kitchell Jr. narrate Albert’s key contributions to natural philosophy and the history of science, while also revealing the insights into medieval life and customs that his writings provide.

Irven M. Resnick is professor and chair of excellence in philosophy and religion at the University of Tennessee at Chattanooga.

Kenneth F. Kitchell Jr is professor emeritus of classics at Louisiana State University and the University of Massachusetts, Amherst.

"Albertus Magnus?, the Dominican friar born sometime around 1200 and canonized in 1931, is often called the patron saint of natural scientists, but he might as well be called the patron saint of curiosity. The 38 volumes of his collected works cover not only theology, law and logic, but almost every science known to his era: zoology and botany, physiology and medicine, astronomy and astrology, geography, mineralogy—even its troublesome stepchild, alchemy. His interest in alchemy was the chief reason that his canonisation was so long delayed: it inspired a rich store of legends about his astonishing feats of magic. As the medievalist David Collins asked, is it Magnus or Magus, Albert the Great or Albert the Magician? Resnick and Kitchell, who have long toiled on the Albertian corpus, provide a lively, accessible introduction to his life and thought."
— London Review of Books

“This study of the natural philosophy of Albert the Great is as illuminating as its subject, whom the fourteenth-century Dominican Henry of Herford described as ‘the brightest sun from among all of the philosophers of the whole of Christendom.’ Resnick and Kitchell have masterfully filled a significant lacuna in anglophone scholarship on Albertus Magnus. Highly recommended.”
— Franklin T. Harkins, Boston College

“Another one of those solid and valuable pieces of scholarship that we have come to expect from Resnick and Kitchell—this time a book that manages to be both an accessible introduction and a useful companion to their heroic translation of Albertus Magnus’ colossal On Animals.”
— Bruno Tremblay, St Jerome’s University, Ontario

“Resnick and Kitchells Albertus Magnus and the World of Nature is a truly worthy tribute to the life and work of the Doctor universalis. One of the first of its kind in the Anglo-American research community, this book offers a reliable general introduction to Albertus Magnus and presents his view of the natural world to a wide audience.”
— Henryk Anzulewicz, Albertus Magnus Institut, Bonn