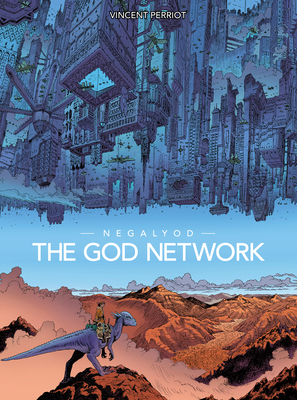 Negalyod follows dinosaur shepherd, Jarri, as he joins a rebel group intent on destroying the totalitarian government that controls his dystopian world. Perfect for fans of Jurassic World!

In a post-apocalyptic far future/alternate world, dinosaurs roam the desolate land, while the last denizens of humanity survive together in technological cities run by a military regime.

Jarri, a loner who shepherds a group of dinosaurs, travels to the city when his herd is murdered. There he becomes involved with a rebel group who defy the totalitarian society, and uncovers a conspiracy that reveals the true nature of the world they live in. What he finds will change his life forever...

Written and illustrated in lavish detail by ground-breaking author Vincent Perriot, this stunning graphic novel will make you think twice about reality.

Vincent Perriot is an award winning author and illustrator from France. He studied at the School of Fine Arts in Angouleme, then went on to contribute to Editions de la Cerise, before publishing his own works. After moving to Paris, Vincent collaborated on the illustrations of the animated film le Chat du Rabbin, by Joann Sfar, and also adapted Belleville Story into a comic. His numerous awards include: the Great Golden Squirrel at the Angoulême festival in 2001; the Young Talent Prize at the Angoulême festival in 2005; the Young Comics Talent Prize in 2009; and most recently in 2019, the Saint-Michel Prize for Negalyod.

"[An] elegiac fantasy set in a postapocalyptic, exquisitely drawn wild world ... This combo of dinosaurs and Wild West–styled dystopia makes for an offbeat epic with European flair" - Publisher's Weekly


"Negalyod is beautiful and evocative. It will captivate you completely and leave you wanting more."
- Samantha Puc, Comics Beat