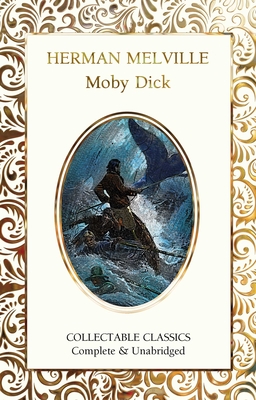 The Great American . . . well, it's more than a novel. It's a living, breathing, swirling world filled with tragedy and comedy. If you've never gotten past the famous first sentence, reading just a little further will reveal Melville's wicked sense of humor: "Whenever I find myself growing grim about the mouth; whenever it is a damp, drizzly November in my soul; whenever I find myself involuntarily pausing before coffin warehouses, and bringing up the rear of every funeral I meet; and especially whenever my hypos get such an upper hand of me, that it requires a strong moral principle to prevent me from deliberately stepping into the street, and methodically knocking people's hats off -- then, I account it high time to get to sea as soon as I can." This deadpan delivery permeates this thoroughly American book: both a philosophical discourse and a practical guide to every conceivable facet of whales and whaling. One needs only get to the end of that first chapter, to read Ishmael's reverie of newspaper headlines -- "Grand Contested Election for the Presidency of the United States" / "Whaling Voyage By One Ishmael" / "Bloody Battle in Affghanistan" -- to realize that Moby-Dick is still an eternal book, one that should be read in our time now more than ever. — Northshire Staff

The FLAME TREE COLLECTABLE CLASSICS are chosen to create a delightful and timeless home library. Each stunning edition features deluxe cover treatments, ribbon markers, luxury endpapers and gilded edges. The unabridged text is accompanied by a Glossary of Victorian and Literary terms produced for the modern reader. American writer Herman Melville wrote Moby Dick in 1851 but it took decades before it was finally regarded as a great American novel, and worthy of its place among the greatest texts of humankind. A tale of imagination and adventure, it recounts the obsessive quest of Ahab, captain of a whaling ship seeking vengeance on Moby Dick, the white whale that had bitten off his leg on a previous voyage.

Herman Melville (1819-91) is the author of the novel Moby Dick, which was a commercial failure during his lifetime but is now considered a classic. Born in New York City, Melville enjoyed some years as a successful writer following the publication of his first book Typee in 1896. He produced a number of travelogues and nautical works, inspired by his earlier experience as a sailor. During his later years, however, his work fell out of favour and he became largely forgotten until the 1910s and 20s saw a revival of his work. Judith John (glossary) is a writer and editor specializing in literature and history. She has worked as an editor on major educational projects, including English A: Literature for the Pearson International Baccalaureate series. Judith's major research interests include Romantic and Gothic literature, and Renaissance drama.