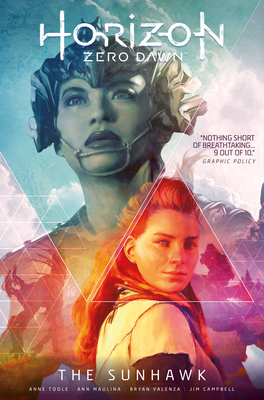 TITAN COMICS and GUERRILLA GAMES are proud to announce an all-new graphic novel set after the events of the critically acclaimed, award-winning video game Horizon Zero Dawn! A new adventure with Talanah and Aloy awaits!

Horizon: a far-future Earth full of epic natural beauty and forgotten ruins, where awe-inspiring, animal-like machines are the dominant species and humans struggle to survive in pre-industrial tribes. In the aftermath of a titanic battle that almost laid waste to the capital city of Meridian, Talanah, one of the greatest machine-hunters in the land, struggles to find her place in the rebuilding effort. Making matters worse, Aloy, her trusted friend and confidant, has disappeared. When a new threat emerges in the hinterlands, she must decide how best to serve her tribe, her friends, and herself.

Anne Toole, winner of Writers Guild Award, was one of the writers on the Horizon Zero Dawn video game. The game earned critical acclaim for its writing and won the Golden Joystick Award for Best Storytelling. She also created the hundred-episode series Alles Liebe, Annette and wrote for the Emmy-winning webseries The Lizzie Bennet Diaries. She also contributed writing to the videogame The Witcher.

Ann Maulina is an up and coming artist based in Indonesia. She is the author and artist for her own webcomic Raruurien.

"That same sense of wonder and danger that one gets while playing the game transfers over to the comic, with vibrant colors and deadly machines inhabiting a blossoming natural word ... The thrill of the hunt and the adrenaline rush that comes with hunting robo-dinos is as present here as it is in the game." - Graphic Policy

"Writer Anne Toole tells an action-packed story ... this team creates a comic that anyone can enjoy, leaving the unfamiliar reader with the itch to start playing Horizon Zero Dawn" - Bleeding Cool

"The artwork is wonderful" - But Why Tho

"A visual delight ... shaping up to be an important addition to the wider story" - Gayming Mag

“Faith and traditions, rivalry and love and violence and death all collide on the plains of this new world and on the pages of this exemplary tie in comic. If you loved the game, you need this. if you haven’t played it yet, I honestly envy you. And you need this” - Alastair Stewart