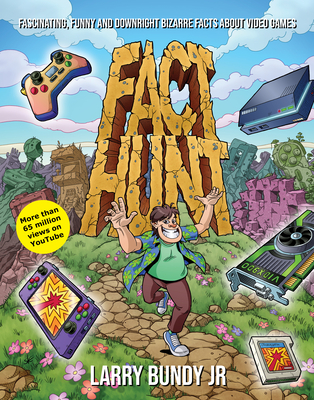 By Larry Bundy
$28.95
Click Title for IN STOCK Location

A bumper collection of facts about video games from YouTuber extraordinaire, Larry Bundy Jr, this book will debunk myths and urban legends, delve into developers' biggest successes and failures, explore the odd characters behind the games and unearth the obscure, the forgotten, the cancelled and the abandoned aspects of the gaming world. For the past decade, Larry has painstakingly trawled through countless old magazines, routinely harassed developers, and blackmailed journalists to uncover these amazing tidbits and anecdotes that would have fallen by the wayside of history. Now he has compiled them into a fun, full-colour book with sections on botched game launches, pointless peripherals, unreleased video game movies, weird guest fighters and much, much more. Along the way, he has invited a few famous gaming guests, including Stuart Ashen and Did You Know Gaming?, to provide their favourite quips for your personal perusal. So whatever your level of knowledge about video games, you're guaranteed to learn a ton of entertaining new information.

Larry Bundy Jr's YouTube channel, which focuses on video game history, currently boasts over 350k subscribers and over 50 million views. He was the first YouTuber to have a television show commissioned, Guru Larry's Retro Corner, which aired on Sky TV for eight years. He has worked as a character and concept artist on projects for Disney and Aardman Animations, and as a voice actor in a number of animated shows and sketches for the web.