The Question: The Deaths of Vic Sage (Hardcover) 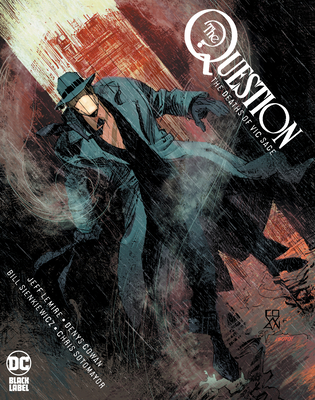 Eisner-winning writer Jeff Lemire joins forces with the legendary art team of Denys Cowan and Bill Sienkiewicz to resurrect Vic Sage, only to destroy him all over again...and again...

For years, Vic Sage has worn the faceless mask of the Question to clean up the streets of Hub City by sheer force of will. He knows right from wrong. He knows black from white. But what happens when he is drawn into a conspiracy that reaches from the heights of Hub City power to the depths of its underground tunnels? What happens when things stop being black-and-white and start getting a little gray? And what happens when, in a secret chamber deep beneath the city, Vic Sage meets his own end...and his new beginning?

Award-winning Canadian cartoonist Jeff Lemire is the creator of the acclaimed monthly comic book series SWEET TOOTH, published by DC/Vertigo, and the award winning graphic novel ESSEX COUNTY, published by Top Shelf. Lemire was prominent in DC Comics' hugely successful "New 52" line-wide relaunch as the writer of ANIMAL MAN, JUSTICE LEAGUE DARK, and FRANKENSTEIN: AGENT OF S.H.A.D.E. He has also written the monthly adventures of SUPERBOY, THE ATOM and CONSTANTINE. In 2008 Jeff won the Shuster Award for Best Canadian Cartoonist and the Doug Wright Award for Best Emerging Talent. He also won the American Library Association's prestigious Alex Award, recognizing books for adults with specific teen appeal. He has also been nominated for five Eisner Awards and five Harvey Awards. In 2010 ESSEX COUNTY was named as one of the five Essential Canadian Novels of the Decade. He currently lives and works in Toronto with his wife and son.

Bill Sienkiewicz has had a major impact on the comic book field with his innovative use of multimedia, collage, illustration techniques, and storytelling. He has won nearly every major comics award in the U.S. and abroad, and has exhibited his art worldwide. Among his best-known works are the series Elektra: Assassin, for which he received the prestigious Yellow Kid Award, and the critically acclaimed Stray Toasters, which he both wrote and illustrated. He was nominated for two Emmy Awards for his work on the animated series Where in the World Is Carmen Sandiego?, and he also worked on the Academy Award-winning film Unforgiven as well as contributing cover and interior illustrations for the DVD and Blu-ray releases of The Venture Bros. seasons one and three. He is currently doing covers for the special five-volume limited edition of The Collected Stories of Philip K. Dick and working on the transmedia project Electro*Love, which he co-created with musician and producer Dave Stewart.