Verifiable Evidence for the Book of Mormon: Proof of Deliberate Design Within a Dictated Book (Hardcover) 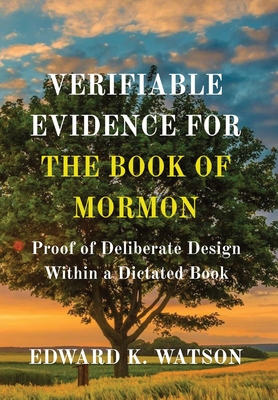 Verifiable Evidence for the Book of Mormon is the first book to provide testable proof that there is something unusual about the Book of Mormon. It should not exist. Subject matter experts know, with absolute certainty, that its creation process cannot produce its contents. But there it is.Out of the millions of books in existence, the Book of Mormon is the only one produced by a static dictation process, where the 23-year-old Joseph Smith dictated the over 269,000-word manuscript to his scribes while looking at his seer stone in a hat between April 7 and July 1, 1829. His output was phenomenal - his daily word count ranged from 4100 to 5000 words, two to three times higher than Stephen King and Mark Twain. But unlike the case with every other famous writer, after Smith's scribes wrote down the text, the structure was fixed and was never rearranged or rewritten. All subsequent edits were kept to the grammar, spelling, and mechanics realms, not content edits. In other words, Joseph Smith's production of the Book of Mormon was structurally a "first draft is the final draft" process. We know this because we still have 28% of the Original Manuscript (the text the original scribes used to record Smith's words) and nearly 100% of the Printer's Manuscript. We can compare the modern edition of the Book of Mormon to the version that came from Smith's mouth and can confirm they are structurally identical.If the dictation process occurred - as a dozen eyewitnesses claimed, and as seen by the surviving source material, then the book's contents should reflect the disorganized nature of dictating ideas off the top of one's head. The book should be filled with rambling and unfinished thoughts and replete with the errors indicative of the dictation method.It does not. Instead, over one-third (34%) of the Book of Mormon is comprised of seventy-five structured essays - a type of literature that can only be created by deliberate design. Most notably, 21% of the book is made up of forty-six argumentative essays - a class of script comprised of a thesis statement, argument/evidence pairs, and conclusion that can only be formed by iterative writing, where a person repeatedly rewords and enhances text following a specific structure.Anyone who has attended university knows from experience that it is not possible to create structured essays by the dictation process. How then did Joseph Smith do what millions know firsthand cannot be done? Not once, not twice, but seventy-five times?This book contains two papers that break down five of the Book of Mormon's forty-six argumentative essays. They prove that these sections can only be created by deliberate design. One of these essays, Alma 36, is shown to have three complete facets impossible to be dictated in just a few hours - it is a persuasive essay, modified public speech, and thematic chiasmus rolled into one. What explains these empirical impossibilities in a book that claims to have been written so that the world may believe that Jesus is the Christ, the Eternal God (Title Page, 2 Nephi 26:12) and for the world to believe that the Holy Bible's teachings are true (1 Nephi 13:38-40; Mormon 7:9)?