Man Shark: The Legends of Lainjin, Book One (Paperback) 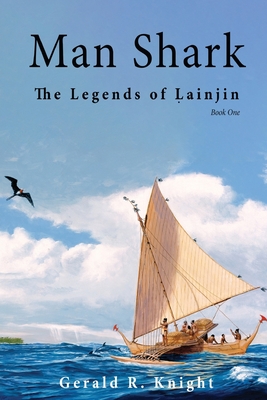 A work of literary historical fiction, Man Shark is based on an unusual story amid the extensive oral literature of the Marshall Islanders that uncharacteristically has no ending. Tarmalu leaves her baby in the care of others while she leads her fleet of proa from the shelter of the Wotho Atoll lagoon out into the open ocean to save their craft from the certain destruction of an oncoming typhoon. Never heard from again, her son, Ḷainjin grows up to undertake an epic search for her creating a renowned navigational chant to record the seamarks along the way. Does he ever find her?

Man Shark is the first book of a multigenerational story that attempts to complete this untold tale. His unspeakable prequel search completed, Ḷainjin grasps at his last chance for the happiness of a normal life. The hardened seafarer meets Liṃanṃan at sea prior to a storm that shall forever intertwine their lives. She captivates his attention, but once ashore, can he resist the enticements of Likkōkālọk her matrilineal cousin and heir apparent to her father's atoll?

Throughout the series, Gerald R. Knight retells many of the classic mythologies translated in his book Man This Reef, this time told from his character's perspectives, with words woven into the cultural setting of his novel.