Toronto: Biography of a City (Paperback) 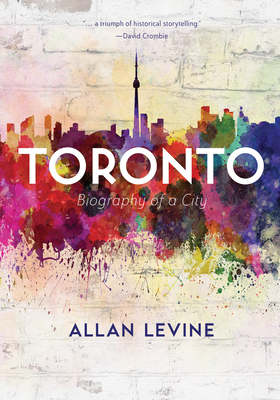 Allan Levine's biography of Toronto is a triumph of historical storytelling. Avoiding the worn path of grand themes and broad concepts of civic evolution, he instead ventures out, engagingly marshalling real-time encounters of people, places and events--the good, the bad and the ugly of it all. This fresh take on Toronto evokes a saga of the city that keeps the delighted reader turning the pages, eager to enjoy--and learn--more.

In the last seventy years, Toronto has been transformed from a provincial town to a significant urban heavyweight. Few cities have experienced such sustained growth, and the packed streets of North America's fourth-largest city are a far cry from the origins of the city as "Little York," which was comprised of the Lieutenant-Governor's muddy tent--which he shared with his wife and many children--and some barracks. Between then and now, fervent Orangemen have imposed strict morals on the growing provincial town, and an influx of immigrants has changed the face of the city.

With the same eye for character, anecdote and circumstance that made Peter Ackroyd's London and Colin Jones's Paris so successful, Levine's captivating prose integrates the sights, sounds and feel of Toronto with a broad historical perspective, linking the city's present with its past through themes such as politics, transportation, public health, ethnic diversity and sports. Toronto invites readers to discover the city's lively spirit over four centuries and to wander purposefully through the city's many unique neighbourhoods, where they can encounter the striking and peculiar characters who have inhabited them: the powerful and powerless, the entrepreneurs and the entertainers, and the moral and the corrupt, all of whom have contributed to Toronto's collective identity.