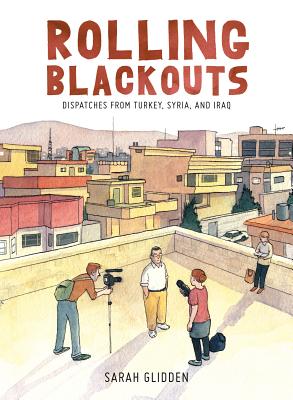 To understand how journalism works, cartoonist Glidden hitched a ride to Iraq with the Seattle Globalist writer/activists. She observes refugees, suspected terrorists, even an American soldier searching for himself. An enlightening depiction of a war-torn region - but also the post-9/11 generation trying to comprehend the ruins.

"Sarah Glidden’s remarkable Rolling Blackouts adds a new twist to the [graphic journalism] form. Glidden accompanies a team of journalists through Syria and Iraq and her muted watercolours record not only the lives of people in war zones but the way the media interacts with them. Highly recommended."—The Guardian

Cartoonist Sarah Glidden accompanies her two friends—reporters and founders of a journalism non-profit—as they research potential stories on the effects of the Iraq War on the Middle East and, specifically, the war’s refugees. Joining the trio is a childhood friend and former Marine whose past service in Iraq adds an unexpected and sometimes unwelcome viewpoint, both to the people they come across and perhaps even themselves.

As the crew works their way through Turkey, Iraq, and Syria, Glidden observes the reporters as they ask civilians, refugees, and officials, “Who are you?” Everyone has a story to tell: the Iranian blogger, the United Nations refugee administrator, a taxi driver, the Iraqi refugee deported from the US, the Iraqis seeking refuge in Syria, and even the American Marine.

Glidden (How to Understand Israel in 60 Days or Less) records all that she encounters with a sympathetic and searching eye. Painted in her trademark soft, muted watercolors and written with a self-effacing humor, Rolling Blackouts cements Glidden’s place as one of today’s most original nonfiction voices.

Sarah Glidden's debut book, How to Understand Israel in 60 Days or Less landed on several best of the year lists, including Entertainment Weekly; earned a YALSA Great Graphic Novels for Teens distinction; and won an Ignatz Award. A graduate of Boston University, she now lives in Seattle.

"Sarah Glidden’s remarkable Rolling Blackouts adds a new twist to the [graphic journalism] form. Glidden accompanies a team of journalists through Syria and Iraq and her muted watercolours record not only the lives of people in war zones but the way the media interacts with them. Highly recommended."—The Guardian

"[Glidden's] technique, combined with dozens of hand-painted snapshots of each of her subjects, feels more personal than simply text or images alone. By making these experiences feel so personal, Ms Glidden has helped to emphasize the seriousness of their struggle."— The Economist

"Rolling Blackouts is...meticulous, probing...at once a densely layered reckoning with the region's complex politics, as well as an inquiry into journalistic methods."— The Globe and Mail

"An intricate investigation of how the reality of conflict gets filtered through personal, political, and journalistic narrative...This work—quiet but challenging, plain yet beautiful—exemplifies [Glidden's] skillful, sensitive reportage."—Library Journal Starred Review

"Glidden does a brilliant job in chronicling a two-month journey with journalist friends through Turkey, Syria, and Iraq to report stories about the impact of the Iraq War on Middle Eastern inhabitants...The power of Glidden’s narrative is in how it asks fundamental questions about what journalism is, what kinds of stories it tells, and what purpose these stories serve. She also manages to crystallize hours of recorded interviews with the locals into insightful discussions of complex situations."—Publishers Weekly