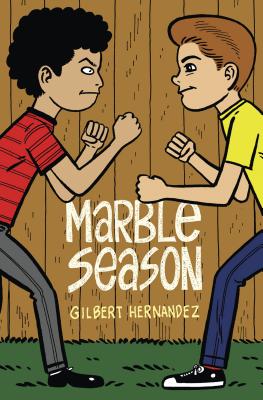 The endless summer of childhood is perfectly captured by the co-creator of Love and Rockets. A poetic love letter to youthful imagination and Superman re-runs. — Charles Bottomley

"Marble Season sometimes feels like one long, seamless shot of budding love, brimming violence and suddenly struck friendships. This is a highly physical, meta-Peanuts suburban universe in which adults are off-camera, but navigating other kids is plenty harrowing." -Washington Post Best Comics of 2013

The untold coming-of-age story from a contemporary comics master

Marble Season is the semiautobiographical novel by the acclaimed cartoonist Gilbert Hernandez, author of the epic masterpiece Palomar and cocreator, with his brothers, Jaime and Mario, of the groundbreaking Love and Rockets comic book series. Marble Season is his first book with Drawn & Quarterly, and one of the most anticipated books of 2013. It tells the untold stories from the early years of these American comics legends, but also portrays the reality of life in a large family in suburban 1960s California. Pop-culture references-TV shows, comic books, and music-saturate this evocative story of a young family navigating cultural and neighborhood norms set against the golden age of the American dream and the silver age of comics.
Middle child Huey stages Captain America plays and treasures his older brother's comic book collection almost as much as his approval. Marble Season subtly and deftly details how the innocent, joyfully creative play that children engage in (shooting marbles, backyard performances, and organizing treasure hunts) changes as they grow older and encounter name-calling naysayers, abusive bullies, and the value judgments of other kids. An all-ages story, Marble Season masterfully explores the redemptive and timeless power of storytelling and role play in childhood, making it a coming-of-age story that is as resonant with the children of today as with the children of the sixties.

Gilbert Hernandez was born in Oxnard, California, and is the cocreator, with his brothers, Jaime and Mario, of the acclaimed comic book series Love and Rockets. Hernandez has won numerous awards for his stories, including the Kirby Award, the Inkpot Award, the Harvey Award, and the United States Artists Literature Fellowship. He resides in Las Vegas, Nevada, with his wife and daughter.

“Hernandez is brilliant on the particular embarrassments of growing up . . . and on the way its disappointments, however trivial, linger into adulthood . . . Marble Season is a treat: beady, nostalgic and sometimes unexpectedly piercing.” —Guardian

“Set in a lower-middle-class multiracial Southwestern suburb in the early 1960s, Marble Season is a wonderfully evocative account of a group of kids for whom popular culture... serve as both a lingua franca and a not wholly reliable guide to the mysteries of social life...in Marble Season, the slow encroachment of adolescence, both a threat and a promise, gives the work emotional heft.” —The Globe & Mail

“In this semi-autobiographical tale, Mr. Hernandez captures the wonder of childhood -- the joy of imagination, an appreciation for comic books and all the ultimately petty but seemingly world-shattering trials and tribulations of friendships during that time in one's life.” —New York Times