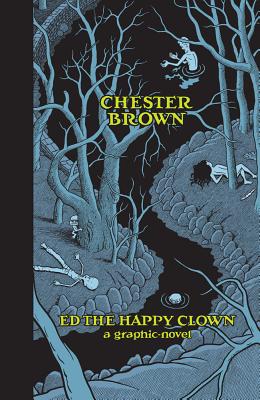 Vampires, pygmies and fecal matter ... the ghastly reek of 1980s underground comix lives again in this scatological early opus from the celebrated cartoonist behind Louis Riel and Paying for It.

In the late 1980s, the idiosyncratic Chester Brown (author of the muchlauded Paying for It and Louis Riel) began writing the cult classic comic book series Yummy Fur. Within its pages, he serialized the groundbreaking Ed the Happy Clown, revealing a macabre universe of parallel dimensions. Thanks to its wholly original yet disturbing story lines, Ed set the stage for Brown to become a world-renowned cartoonist.

Ed the Happy Clown is a hallucinatory tale that functions simultaneously as a dark roller-coaster ride of criminal activity and a scathing condemnation of religious and political charlatanism. As the world around him devolves into madness, the eponymous Ed escapes variously from a jealous boyfriend, sewer monsters, the Royal Canadian Mounted Police, and a janitor with a Jesus complex. Brown leaves us wondering, with every twist of the plot, just how Ed will get out of this scrape.

The intimate, tangled world of Ed the Happy Clown is definitively presented here, repackaged with a new foreword by the author and an extensive notes section, and is, like every Brown book, astonishingly perceptive about the zeitgeist of its time.

Chester Brown lives in Toronto, where he ran for Parliament in the general election as a member of the Libertarian Party of Canada. His most recent book is Paying for It.

“One of comicdom's maverick masters.” —Time

“It may be the most extreme art you'll ever encounter.” —The Village Voice

“It delivers a series of moral and cerebral and horndog thwacks . . . It's a real squeamish-making work of art.” —The New York Times on Paying For It