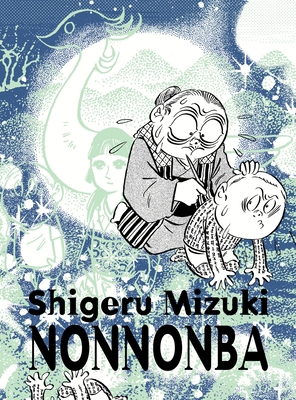 By Shigeru Mizuki, Jocelyne Allen (Translated by)
$26.95
Hard to Find - May no longer be available

NonNonBa is the definitive work by acclaimed Gekiga-ka Shigeru Mizuki, a poetic memoir detailing his interest in yokai (spirit monsters). Mizuki's childhood experiences with yokai influenced the course of his life and oeuvre; he is now known as the forefather of yokai manga. His spring 2011 book, Onward Towards Our Noble Deaths, was featured on PRI's The World, where Marco Werman scored a coveted interview with one of the most famous visual artists working in Japan today.

Within the pages of NonNonBa, Mizuki explores the legacy left him by his childhood explorations of the spirit world, explorations encouraged by his grandmother, a grumpy old woman named NonNonBa. NonNonBa is a touching work about childhood and growing up, as well as a fascinating portrayal of Japan in a moment of transition. NonNonBa was the first manga to win the Angoulême Prize for Best Album. Much like its namesake, NonNonBa is at once funny and nostalgic, firmly grounded

Born March 8, 1922 in Sakaiminato, Tottori, Japan, Shigeru Mizuki is a specialist in stories of yokai and is considered a master of the genre. He is a member of the Japanese Society of Cultural Anthropology, and has traveled to more than sixty countries around the world to engage in fieldwork on the yokai and spirits of different cultures. He has been published in Japan, South Korea, France, Spain, Taiwan, and Italy. His award-winning works include Kitaro,Nonnonba, and Onward Towards Our Noble Deaths. Mizuki's four-part autobiography and historical portrait Showa: A History of Japan won an Eisner Award in 2015.

“Mizuki conveys his pen-and-ink messages with a surreal combination of cartoon-like people superimposed against harsh realistic renderings of their environment.” —Marco Werman, PRI's The World

“Shigeru Mizuki is the preeminent figure of Gekiga manga and one of the most famous working cartoonists in Japan today–a true living legend.” —Graphic Novel Reporter

“[Mizuki] is one of Japan's greatest illustrators, a master of both realism and manga.” —Globe and Mail

“This book is excellent . . . I can only hope we're soon flooded by Mizuki translations. I'd like to drown in them.” —Newsarama