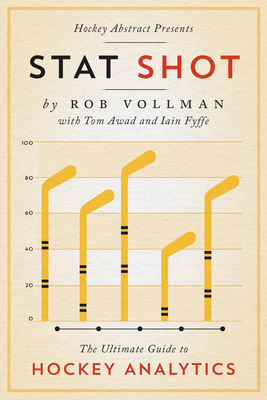 Making advanced stats simple, practical, and fun for hockey fans Advanced stats give hockey's powerbrokers an edge, and now fans can get in on the action. Stat Shot is a fun and informative guide hockey fans can use to understand and enjoy what analytics says about team building, a player's junior numbers, measuring faceoff success, recording save percentage, the most one-sided trades in history, and everything you ever wanted to know about shot-based metrics. Acting as an invaluable supplement to traditional analysis, Stat Shot can be used to test the validity of conventional wisdom, and to gain insight into what teams are doing behind the scenes -- or maybe what they should be doing. Whether looking for a reference for leading-edge research and hard-to-find statistical data, or for passionate and engaging storytelling, Stat Shot belongs on every serious hockey fan's bookshelf.

Best known for Player Usage Charts and his record-breaking ESPN Insider contributions, Rob Vollman was first published in the fall 2001 issue of the Hockey Research Journal and has since co-authored 10 books in the Hockey Abstract, Hockey Prospectus, and McKeen's magazine series. He writes for NHL.com, and lives in Calgary, Alberta. Tom Awad is a Montreal-based electrical engineer who loves applying numbers to his job, hockey, and anything else he can get his hands on. He has co-authored six previous books on hockey analytics. Iain Fyffe created Hockeythink (originally Puckerings), the first dedicated hockey analytics site, in 2001. He has served as editor of the Hockey Research Journal and was a co-author of the books Hockey Prospectus 2011 and 2012 and Hockey Abstract 2014, as well as the author of On His Own Side of the Puck. He lives in Fredericton, New Brunswick.