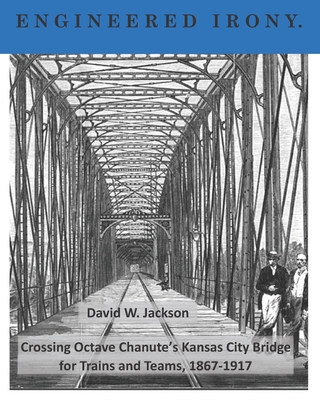 Engineered Irony, a 150th commemorative edition, revisits civil engineers Octave Chanute and George Morison's greatest achievement to 1869-the completion of the Hannibal Bridge-and their 1870 report, The Kansas City Bridge.
Kansas City, Missouri, has enjoyed its "Heart of America" moniker for generations. The Hannibal & St. Joseph Railroad, after years of negotiations and political machinations, chose in 1867 to span their historic bridge-the first ever to cross the Missouri River-at Kansas City, then known as the City of Kansas and formerly the Town of Kansas. The Hannibal Bridge MADE Kansas City, Missouri
Vol. 1 (blue front cover) is a reprint of Chanute and Morison's 1870 report on the construction of the bridge, together with a newly developed biography of Chanute by Bill Nicks, and an essay on the importance of the bridge to civil engineering by engineer Brian Snyder.
Vol. 2 (red front cover) is the culmination of David W. Jackson's decade plus effort to compile this sesquicentennial souvenir highlighting archival resources identifying nearly 1,500 individual skilled laborers and contractors-including five who lost their lives in the venture-who achieved a modern miracle between 1867 and July 3, 1869. During that Independence Day weekend fete, 30,000 spectators from across the Midwest descended upon the fledgling City of Kansas to celebrate the remarkable moment on the Missouri Riverbank. Another feature of Engineered Irony is a comprehensive gallery of all the known images of the Kansas City Bridge (aka. the Hannibal Bridge) from 1867 to 1917, when the bridge was replaced by its descendant, the Second Hannibal Bridge. Bibliography. Illustrations. Index.