From the Streets of Brooklyn to Trainer to the Stars: John Parisella's Lifetime of Celebrity Connections (Paperback) 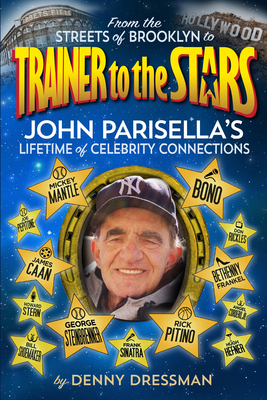 JOHN PARISELLA grew up in Brooklyn, the son of a bookmaker, and began making daily trips to Aqueduct and Belmont while still in high school. Though initially afraid of horses, by the mid-1980s he became the first Thoroughbred trainer ever under contract for $1 million a year. He trained horses for almost a half-century, his success rate at times hovering between 40% and 50%. In the 1970s, during an appearance on "The Tonight Show With Johnny Carson," he was dubbed "Trainer to the Stars," a title that describes his lifetime of celebrity connections driven by an unusually engaging personality. During years when racetracks were numerous and the Sport of Kings attracted large crowds nearly everywhere, he earned the respect of horsemen across America by turning many seemingly lame also-rans into winners and champions. At the same time he became the friend of, and enjoyed many adventures with, numerous celebrities--including basketball coach Rick Pitino, baseball icon Mickey Mantle, colorful Joe Pepitone and mercurial owner George Steinbrenner of the New York Yankees; Bono, lead singer of the pop music group U2; comedian Don Rickles; and actors James Caan, Telly Savalas, Jack Klugman and Don Adams. He's also the stepfather of reality TV star, best-selling author and wealthy businesswoman Bethenny Frankel. And throughout his flamboyant career he generously offered a helping hand and financial assistance to countless persons with whom he came in contact. FROM THE STREETS OF BROOKLYN TO TRAINER TO THE STARS recounts this fascinating life and career through countless stories told by the man himself and those who shared the incredible experiences with him.

From the Streets of Brooklyn to Trainer to the Stars: John Parisella's Lifetime of Celebrity Connections
$7.98
Very Good