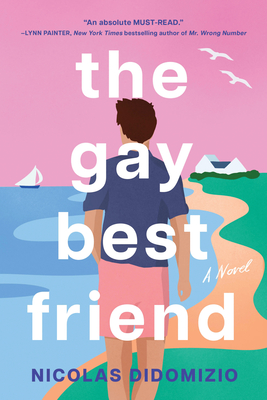 Copies of this title pre-ordered from Northshire Bookstore will be signed by the author. If you would like your book personalized, please let us know in the notes field at checkout.

He's always been the token gay best friend. Now, stuck between a warring bride and groom hurtling toward their one perfect day, he's finally ready to focus on something new: himself.

Domenic Marino has become an expert at code-switching between the hypermasculine and ultrafeminine worlds of his two soon-to-be-wed best friends. But this summer—reeling from his own failed engagement and tasked with attending their bachelor and bachelorette parties—he's anxious over having to play both sides.

The pressure is on. The bride wants Dom to keep things clean. The groom wants Dom to "let loose" with the guys. And Dom just wants to get out of this whole mess with his friendships intact.

But once the rowdy groomsmen show up at the beach house—including a surprise visit from the groom's old frat brother, handsome and charming PGA star Bucky Graham—chaos (and unexpected romance) quickly ensues. By the time Dom returns for the bachelorette party, he's accumulated a laundry list of secrets that threaten to destroy everything—from the wedding, to Bucky's career, to the one thing Dom hasn't been paying nearly enough attention to lately: his own life.

Nicolas DiDomizio holds a bachelor's degree from Western Connecticut State University and a master's degree from NYU. His debut novel, Burn It All Down, was published in 2021 and praised as "unforgettable" by James Patterson. He lives in upstate New York with his partner Graig and their shmooshy bulldog Rocco. The Gay Best Friend is his second novel.