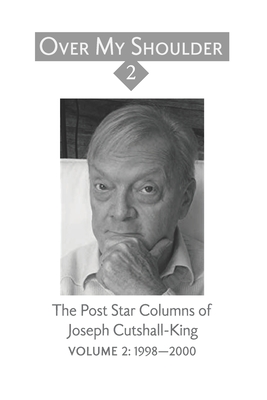 Here's Over My Shoulder 2 by Joseph Cutshall-King-the second collection of his columns on regional history in the Upper Hudson/Lake Champlain Region, originally published by The Post-Star, the daily newspaper of Glens Falls, New York.Over My Shoulder 2 is 203 pages long, with 117 columns' worth of history, all delivered with humor, sometimes with acid commentaries, but always with the ideal that history should be factual and enjoyable, and not torture.Author and historian Cutshall-King's columns cover the Upper Hudson/Champlain Valley region. These 117 columns, published from 1998 to 2000, range over one of the nation's most historic areas, from Saratoga Springs on the south, to Ticonderoga on the north; east into Vermont; and west into the Adirondacks.The columns' topics are relevant: -They can be immediate, such as Presidential impeachments in our history.-They can be essential, such as the abolitionist and suffrage movements in Washington County, NY.-They can be personal, such as offering the author's reminiscences of the joys of eating paste in the first grade The topics are timeless and timely, sometimes as timely as today. The column "Local man's early calls to impeach president" about the 1868 attempt to impeach President Andrew Johnson was published in 1998, just as President Clinton's impeachment was being debated. Ironically, it is being republished now as the current President is undergoing an impeachment inquiry.There are personal stories of the people in Greater Glens Falls Region, which is why Over My Shoulder 2 features a 16-page index. You might find a friend's name-you might even find your own It allows you search on Mel Gibson and the Battle of Saratoga, and on why there are no pigs running in the streets of Bolton Landing Variety is the spice of Over My Shoulder, Volume 2's columns: -Prehistoric settlements 10,000 years ago in Ticonderoga-or the rumrunning days of Glens Falls, when gangster Joey Green was gunned down on South Street-Narratives of little known Black history, such as the story of Prince Taylor, a Black Revolutionary War veteran who became one of Ticonderoga's most prominent citizens.-Cutshall-King's own memories of his childhood spent in Saratoga Springs, Fort Edward and Ticonderoga include memories of those towns and their residents, as well as loving memories of his own family.And speaking of family, the book's editor is the author's daughter, Julia C. Cutshall-King, and the cover design is by the author's brother, Michael George King of Black Swan Image Works, Frederick, MD.Get your copy of Over My Shoulder, Volume 2 and discover why so many people loved the original columns. Here's your opportunity to join the adventure.